I found another blog that had a great post about losing a fish, The 7 Extremely Sad Stages of Losing a Fish.  Follow the link, read it, it will not take you long and it will make you smile. If you lose a fish, do not beat yourself up over it, it happens.  But, take a minute and ask yourself what happened?  What could you have done better?  Can you learn from it?  Did you hurry, “horse” the fish?  That is probably the biggest reason big fish are lost–the angler gets excited, panics, tries to land the fish too soon, and bad, stupid things happen.  Did your equipment perform properly?  If the line broke, was it fresh line or has it been spooled on your reel for far too long?  How are your knot-tying skills?  Was the drag set right?  Would you have been better off to back-reel the fish (What a Drag!)?  Did you get a good hook set?  If not, why not?  Was your rod the right tool for both getting a good hook set and for fighting the fish?  Were the hooks sharp?  Besides horsing fish, in my opinion, dull hooks are the biggest reason fish are hooked and lost.

Learn from it.  Do not make the same mistakes on the next big fish.

But, also remember that some of ’em are going to get away, and if you are like me, you were going to release that big fish anyhow! And then, as the blog I referred to says, “get back on the horse”.  The only way to forget about that big one that got away, is to hook another one!  And the next one will be even bigger!  My son learned this a few years ago, he hooked and lost a nice brown trout out in Nebraska’s Pine Ridge.  He was devastated, he worked that fish for a long time before it finally took a bait.  I told him all he could do was get his line back in the water for the next one.  It came not long after. . . . 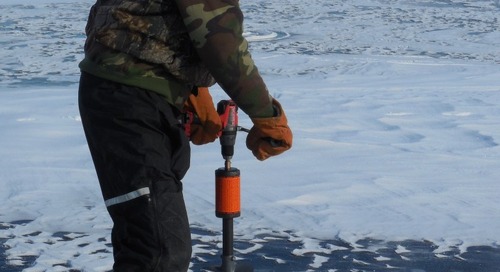 Even the most hard core of us ice-anglers are now resigned to the fact that it is going to be a few months ...