After a light breakfast, Larry helped us climb back onto the road from camp. Jim and Jamie were the only ones bold enough to ride their bikes up the steep, winding road to get back into town. The rest of us walked. Once we got back onto the trail, we shortly came to the bridge over Long Pine Creek, which was magnificent with its dizzying 145- foot drop into the green valley below.

This bridge is a must-see and, in my opinion, is much more breathtaking than the more well-known bridge in Valentine. That day’s section from Long Pine to Wood Lake was beautiful.

We had gone from cultivated lands in Norfolk, to the pine trees and valleys of Long Pine, to the open, rolling, treeless grasslands of the Sandhills.
Almost 10 miles from Long Pine, Jamie, Jim and I stopped into the Silver Circle Bar in Ainsworth, which happened to be open on a Wednesday morning, to fill our water bottles. The locals there suggested that we stop in at the L-Bow Room in Johnstown, which was another 10 miles away.

Jamie and I caught up with Bob in Johnstown, who told us that Jim had just gotten a flat tire and that Carine was helping him. There in Johnstown, we met a painter named Robert Johnson, who had artwork of country scenery displayed on his front yard. Johnson came out and invited us into his home, which was also his studio. He was kind, and shared with us his story. He seemed thankful for our company, and we parted feeling thankful for his. Shortly after, Carine and Jim rolled into town.

Ruth Trobee, the owner and operator of the L-Bow Room in Johnstown, was a warm and chatty woman. Her bar had a log cabin like feel, adorned with western and country trinkets on the wall. A great bison mount hung prominently in the main dining room; Ruth said it used to be a pet that kept jumping over its owner’s eight-foot fences.

She gave us a tour and brief history lesson of the building, which was built in the 1800s, and said that country artists Blake Shelton and Mark Wills have tossed back a few in her establishment. Bob left early, but Jim, Carine, Jamie and I stayed awhile to chat and drink some orange and black cherry cream sodas. Ruth generously offered to deliver food to us if we had trouble finding nourishment in Wood Lake.

We reached Wood Lake in the early afternoon. Although it was a small town of 53, the Wood Lake Campground was modern and well-kept, with clean flushing toilets, water and electricity. While the rest stayed at camp, Jamie and I rode into town to hang out at the Wood Lake Café.

Tired and hungry, we indulged on fried drummies, pie and mindlessly watched a Twilight marathon on TV until the rest of the crew showed up for dinner. Bob and Jim treated us that night. Hard to believe, but Wood Lake was our last night together before the last stretch to Valentine the following day. 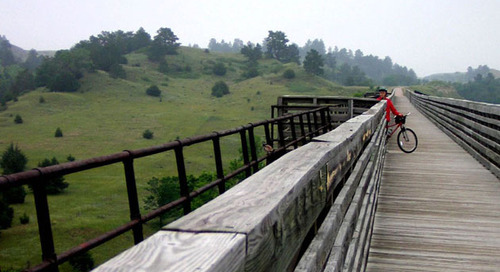 Carine left an hour early. Bob, Jim, Jamie and I returned to the Wood Lake Café for breakfast. We met a doz... 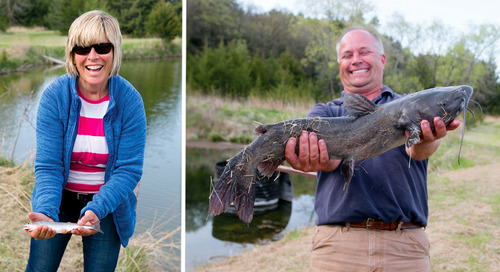 The smell of campfire smoke woke me. Jamie, who arrived early that morning, was preparing coals for a Dutch...