Carine left an hour early. Bob, Jim, Jamie and I returned to the Wood Lake Café for breakfast. We met a dozen ranchers there who were having breakfast at a large table. They warned us about the rough trail ahead and some one-lane traffic on Highway 20. Before leaving, we took as much water as we could because there would be no water or amenities until Valentine.

Bob stayed on the highway. Jim rode hard to catch up with Carine on the trail. Although we missed it, Jim and Carine told us later that some sections before Valentine were in bad shape from cattle being driven on it. These sections were loose and sandy, while other parts were marked by terrible washboards. “It became so rough that I could hardly control my bicycle,” said Jim. “It was like riding on the rumble bars on the side of a highway.”

Jamie and I enjoyed a leisurely ride as we hopped back and forth between the trail and blacktop. We stopped briefly to say hello to some curious horses and a mule. Then we found a box turtle crossing the trail that wanted nothing more than to be left alone. I strangely remember having to pee a lot that day. When out in the open like that, you try to find a ditch and hope that no one sees your bum. In one  section, there was no ditch, so we had to tinkle behind a historical marker.

There was no wind and the Sandhills was exceptionally stunning that morning. The damp smell of spring was in the air, birds chirped all around us, and the green land gently rolled ahead as far as we could see. I love the Sandhills for its quietness, a silence that is so different from anywhere else.

Some miles past Wood Lake, Jamie and I encountered large writing etched into the trail’s surface that said, “Hi Jamie + Jenny + Friends!” Although mysterious, it was a welcomed message that lifted our spirits and told us that we were getting close. It wasn’t until later that we found out it was Kelly Corman and his wife Jen from the Bassett office who wrote the words.

When we finally reached the bridge over Valentine, Jim, Carine, Bob and our rides home were there waiting for us. After photos, hugs, high-fives and soaking in the views over the vast Niobrara River Valley, it became apparent that our unbelievable 195- mile journey together was coming to an end.

Riding in the car back to Norfolk and watching the miles and miles of trail from a moving vehicle – so effortlessly – and replaying what happened there was like an out-of body experience, which was most bittersweet.

Almost a year later, I still don’t miss the bike, but the memories of laughter, learning and camaraderie still tug at my heart strings. I miss the exceptional kindness that we met, from all the people who fed us and filled our water bottles, who shared their history with us, and welcomed us into their lives, if only for a brief moment by the trail – a true testament of Nebraska “Nice.” I deeply cherish this journey, for it provided a rare opportunity for strangers to know one another in a most meaningful and dearest way. ■ 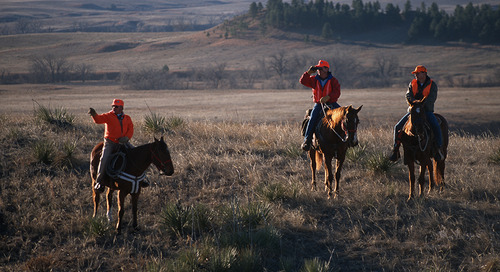 CRAWFORD, Neb. – When tourists catch sight of a bighorn sheep in the Pine Ridge, or a herd of bison grazing... 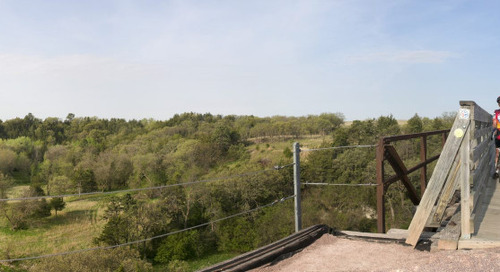 After a light breakfast, Larry helped us climb back onto the road from camp. Jim and Jamie were the only on...