LINCOLN, Neb. – Nebraska’s wildlife seems to have fared well overall in the wake of March’s blizzard and catastrophic flooding.

While some individual animals likely died, some new habitat to benefit wildlife has been created. The full impact of the blizzard and flood, in many cases, won’t be known for some time.

Upland Game – There likely were not many upland gamebird deaths because of the flooding, which occurred prior to the nesting season, as these birds are mobile and likely fled the rising water. It is too early to determine what nesting impacts there may be on pheasants and quail but brood surveys and whistle counts, in conjunction with the Rural Mail Carrier Survey (RMCS), should provide a better picture on the impact of this winter and floods. The April RMCS appears to indicate that this winter may not have been as hard on pheasants and turkey as initially thought. In addition, biologists still are finding prairie grouse in all their traditional lekking areas, but it appears the peak breeding activity may be slightly behind schedule compared to average years.

Waterfowl – It is too soon to know if the blizzard hurt Canada goose nesting, but the precipitation should provide good nesting conditions through May. Flooding likely didn’t impact waterfowl negatively, but instead created habitat for foraging spring migrators.

Furbearers and Carnivores – Some semi-aquatic furbearers, such as mink, muskrat, beaver and river otters, may have drown or been killed when dens were blocked or destroyed. Beaver dams and lodges likely were blown out by floodwater and debris. The long-term outlook may be good, as surge flooding creates new channels, sloughs, and backwaters that will provide new habitat.

Nongame Birds – In general, floods likely are beneficial to ecosystems and species in the long-term. The March blizzard and flooding produced a tremendous amount of wetland habitat, which would benefit millions of migratory birds. Some birds, especially some early-arriving insectivores likely perished in the blizzard, but most cold-sensitive species do not arrive until the latter part of April.

Big Game – There have been dead deer observed after the blizzard; diet, malnutrition and disease seeming to contribute to the loss. However, good numbers of deer still are being seen in many areas. No losses of bighorn sheep, elk, antelope or turkey have been reported.

Other Wildlife – While individual animals may have been impacted, most species were likely not affected at the population level. For the most part, flowers were not blooming yet, most migrant species were not in Nebraska, and birds were not nesting during the time of increased precipitation. Some benefits include the increase in connectivity of waterways, scouring of invasive vegetation, and aggregation of sandbars. 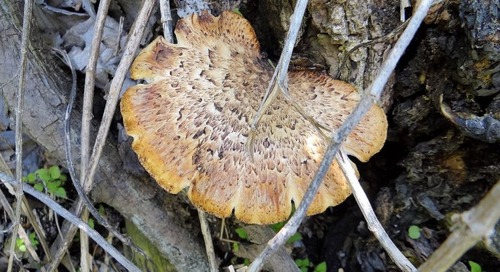 Morels Aren’t the Only Edible Fungi in Spring

Along with finding and picking morel mushrooms, there is another edible wild fungi growing in your moist wo...