The most significant approved changes to Commission orders for big game include:

— Split of the Niobrara River elk unit in to East and West, and absorb the Boyd Unit into the Niobrara East Unit.

— Shift of deer permits in Pine Ridge from Any Deer to Any Whitetail in response to public reported and research recorded mule deer deaths over winter and spring.

A public hearing was held for input regarding the listing and delisting of state threatened and endangered species in the Commission’s District 3, which is northeastern Nebraska. Staff made a presentation on the northern river otter, western silvery minnow, plains minnow, flathead chub and the sicklefin chub.

In addition, the Commission approved the acquisition of 74.97 acres in Banner County adjacent to Williams Gap Wildlife Management Area and designated it as an addition to the area.

Conservation Officer Levi Krause was presented the Award of Valor for his “tireless efforts in helping rescue individuals from their homes during Nebraska’s catastrophic flooding of March 2019.” For four days, he operated his airboat to help first responders evacuate 60 people from their homes amid high winds and rising waters. In addition, all Game and Parks staff who assisted in flooding efforts were recognized for going above and beyond the call of duty to keep people safe.

The Commission also heard several staff updates, including the new Take ’em Fishing challenge, which invites anglers to pledge to take a new or lapsed angler fishing for a chance to win prizes. All of the commissioners took the pledge to accept the challenge.

There also were reports on bighorn sheep and mule deer research, a presentation on the fish, wildlife and park resources in northeast Nebraska, and a report on how the Spalding Dam/Cedar River Fishway is benefitting fish species. 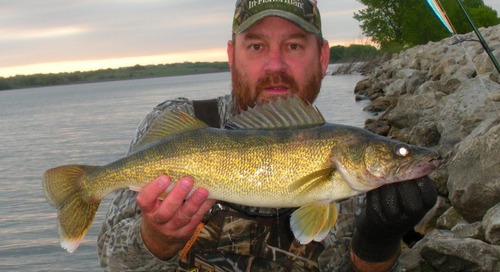 There is no doubt spring is the most popular time of year for fishing.  Everyone thinks they are an angler ...

LINCOLN, Neb. – Nebraska’s wildlife seems to have fared well overall in the wake of March’s blizzard and ca...