Morels Aren’t the Only Edible Fungi in Spring

Along with finding and picking morel mushrooms, there is another edible wild fungi growing in your moist woodlands that you should know and consider harvesting and making for dinner — the dryad’s saddle.

The dryad’s saddle (Polyporus squamosus) , a.k.a., pheasant back’s mushroom, or hawks wing, is a widespread edible wild fungi that is easy to spot beginning in late April and continuing into May.

Found east of the Rockies and potentially throughout Nebraska, it is a common basidiomycete bracket fungus having a scaly yellowish-brown upper surface. It grows singly or in layers, on living or dead deciduous wood, especially elms. The dryad’s saddle can reappear for years in the same location, often fruiting more than once a year (spring and fall).

Upon further examination, this mushroom is attached primarily to dead hardwood trees, logs or stumps at one point with a thick stem. Generally, the fruit body is 3–12 inches across and up to 4 inches thick. The body can be yellow to brown and has what are called “squamules” or scales on its upper side. On the underside pores can be seen that are characteristic of the genus Cerioporus.

The dryad’s saddle is very easy to identify and whose lookalikes are not edible (due to a tough texture), or poisonous (accurate identification with any fungi , however, is imperative to avoid health implications). And because it grows on dead or decaying fallen trees, it’s quite easy to locate. You’ve probably seen it before (and didn’t realize it) while walking in a woodlot or along a nature trail.

The species was first described scientifically by British botanist William Hudson in 1778, who named it Boletus squamosus, this species was renamed Polyporous squamosus by Swedish mycologist Elias Magnus Fries in his Systema Mycologicum publication in 1821.

The dryad’s saddle plays an important role in woodland ecosystems by decomposing wood, usually elm, but is occasionally a parasite on living trees. Among other tree hosts are ash, cottonwood, poplar, walnut, maple, basswood, sycamore, hackberry, horse chestnut, buckeye and willow. Though the land may offer an abundance of pheasant’s back, as foragers, we must take care great care to not over-harvest this edible species or any wild food. Only pick what you are going to eat, and eat what you have picked.

The dryad’s saddle is considered a good wild edible, most notably when the mushroom is young and tender, but not too large, otherwise it becomes leathery, chewy and somewhat woody to the taste. It should have a deep brown color hue and markings. Avoid specimens that look white or cream-colored as these are normally older. Additionally, if the pores on the underside of the cap are easily scraped off in the field by gently using a pocket knife or fingernail, it’s a keeper for the cooker. If the pores stay in place and appear to be stuck to the cap, use it in a soup broth or possibly a stew. Avid foragers recommended collecting before the mushroom gets much bigger than the circumference of a coffee cup (3-4 inches).

Harvested accordingly, the dryad’s saddle has a fascinating smell and taste combination of fresh cucumber and watermelon rind. After being gathered and to prepare for cooking, mushroom foragers should gently rinse the pheasant’s back caps under cold running water. With a dampened paper towel, or dampened soft kitchen towel, the pores of the underside of the mushrooms must be carefully wiped. They can also be removed by scraping with the side of a paring knife, if desired, but you don’t have to do that. Next, drain and pat dry the remainder. Some folks prefer to give these mushrooms a quick salt-water soak and then a rinse. For cooking purposes, cut off the tender edges of the dryad’s saddle, slice them into small pieces and pan-fry or saute them in butter and minced garlic. The dryad’s saddles can also be baked in a 375-degree Fahrenheit oven for up to 45 minutes with just some olive oil drizzled over them and a bit of salt and pepper. They will be crisp and delicious!

When trying a new wild fungus such as the dryad’s saddle for the first time, only eat a small portion. That way you can see if you have discomfort or an allergic reaction.

Spring is a great time to hunt mushrooms. But remember, beyond the morel is the tasty dryad’s saddle.

WARNING! Any mushroom which grew from or was exposed to recent flood waters should never be eaten. This includes the dryad’s saddle.

Mushrooms and other wild edibles that are on or near the flood plain should be assumed to be contaminated. Flood waters were confirmed to contain E.coli bacteria and other contaminants after testing. Mushrooms are porous and fragile, making them almost impossible to clean.

Any mushrooms found in previously flooded areas should be avoided altogether this year.

Pathogens will dissipate over time above the surface of the soil since they are exposed to the sun and other elements.

The post Morels Aren’t the Only Edible Fungi in Spring appeared first on Nebraskaland Magazine.

LINCOLN, Neb. – Nebraska’s wildlife seems to have fared well overall in the wake of March’s blizzard and ca... 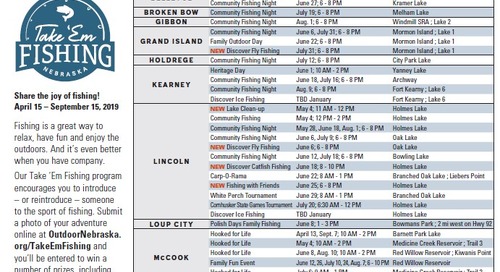 Simply want to post up the schedule of Family Fishing Events for this year: Actually, I should not call the...