LINCOLN, Neb. – The Nebraska Game and Parks Commission on Jan. 20 adopted amended regulations that will allow people to obtain boating safety certification via an online course.

The amended regulation will help streamline boater education by increasing opportunities for constituents, while retaining the classroom and home-study options for obtaining certification. Any boat operator born after Dec. 31, 1985 must have successfully completed the Nebraska boating safety course and be in possession of a valid certificate.

Another boating regulation amendment adopted by the Commission at its meeting in Lincoln standardizes the maps in the Special Rules and Regulations for Nonpublic Lake Associations.

– – Nebraska Game and Parks Commission, $250,000 to surface with crushed limestone 6.8 miles of the Cowboy Recreation and Nature Trail west of Gordon;

— amended wildlife regulations regarding game breeding and controlled shooting areas (CSA). The amendments clarify language regarding the sale of birds by CSA permit holders, changes the date of the season close to April 15, and allows CSA permit holders an additional two weeks to submit required reports.

— approved an increase to the Cash Change Fund at Summit Lake State Recreation Area near Tekamah to support the coinage requirements at the new shower house.

Karie Decker, an assistant administrator in the Wildlife Division, gave a preview of 2017 waterfowl seasons.

Jeff Rawlinson, an assistant administrator in the Communications Division, updated the Commission on efforts to recruit, retain and reactivate hunters and anglers in Nebraska.

In other business, the Commission also refused to issue a declaratory order in response to a petition by Dr. Ann Connor of Kearney regarding the keeping of wild and hybrid cats. The order was refused because the petition requests a declaratory order on the effect of past conduct and the order would not resolve the controversy or uncertainty. 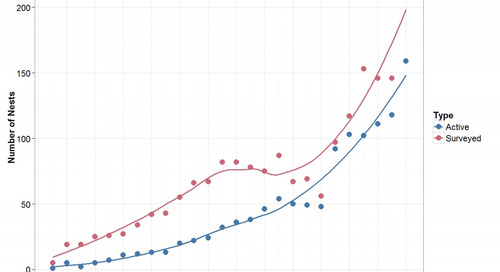 About that jump in Bald Eagle nest numbers

Word got out yesterday via this press release that Bald Eagle nest numbers in Nebraska broke another record...

LINCOLN, Neb. – Persons interested in pond and lake management are invited to a series of free workshops th...