About that jump in Bald Eagle nest numbers

Word got out yesterday via this press release that Bald Eagle nest numbers in Nebraska broke another record.  Like any good press release, this one was concise and stressed the main points, but this blog provides an opportunity to go into a bit more detail.   Breaking records has become old hat with Bald Eagle nest numbers and, in fact, this was the third year in a row when we’ve tallied an unprecedented number of active Bald Eagle nests in the state.  It is also the fifth consecutive year active nest numbers have been over the century mark.  However, not only did the 159 active nests documented in 2016 break a record, the tally is a huge jump from 2015’s record of 118 active nests.  What the data are showing us is that Bald Eagle nest numbers in the state are not only continuing to increase, but the increase is increasing.   This is much easier to show than tell, so take a look at the graphic below showing our data. For many years, I’ve been thinking about the question – when will we begin to see Bald Eagle nest numbers level off?   The increase cannot go on forever since there is limited real estate in Nebraska.  However, we do not appear to be at the point yet, not even close.  Bald Eagles are really beginning to pack into certain areas and along some river corridors.  For example, the map shows several clusters of nests.  Most of these clusters are along major rivers such as the Platte River in eastern Nebraska, the Loup River system in central Nebraska, the lower Niobrara and along the Elkhorn River. However, there remain few, if any, known nests in other parts of Nebraska.   For example, there is a big void in southwest Nebraska, the southwest panhandle and over much of northwestern Nebraska.  We will likely have a few nests eventually in these areas, but their density will likely never approach densities along major river corridors in the east where habitat and food resources are more favorable for eagles. Bald Eagles continue to be a conservation success story.  Their comeback has exceeded expectations.  I hope someday I have an answer for the burning question, how many Bald Eagle nesting pairs can and will Nebraska support?

If you want more information about our 2016 Bald Eagle nest monitoring, please check out our report.

Many thanks to all the organizations and individuals that contributed to our 2016 Bald Eagle nest monitoring.

The post About that jump in Bald Eagle nest numbers appeared first on NEBRASKALand Magazine. 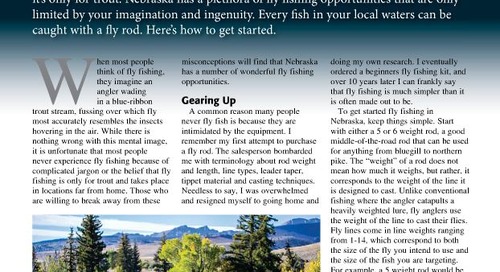 I want to call to your attention to another fishing article in NEBRASKAland magazine.  The January-February...

LINCOLN, Neb. – The Nebraska Game and Parks Commission on Jan. 20 adopted amended regulations that will all...