LINCOLN – The largest field in the history of the Cornhusker Trapshoot will include the defending Cornhusker Cup champion and a strong list of competitors when action begins this week.

More than 2,600 shooters are expected to compete in the 47th annual Cornhusker Trapshoot, which will be held April 28-30 on the home grounds of the Nebraska Trapshooting Association (NTA) in Doniphan, Nebraska.

Many of the top shooters from 2015 return this year, including defending Cornhusker Cup champion Dean Rodgers of Papillion-LaVista South. Rodgers will go for two in a row against a field that includes six other shooters from last year’s top 10 overall.

One of the contenders is Zack Krzyzanowski of North Platte, who was third last year. He is the two-time defending champion at 16-yard targets. Over the past two years at 16 yards, Krzyzanowski has hit 349 of 350 targets, including shoot-offs.

Another is Brandon Kreikemeier of Omaha Creighton Prep, who finished fourth last year. He is part of the Creighton Prep Blue team that returns all five shooters from the 2015 high school team champion. The other team members are: Adam Misek, Noah Walz, Andrew Emodi and Isaac Sheilds.

“This is the largest and greatest youth event in Nebraska,” said Shoot Director Terry Brentzel of Oshkosh. “It not only draws youth but their families, as well. It’s a great shoot with a state fair atmosphere.”

Brentzel said this event, and trap, in general, are family activities. “It’s so neat to see the entire family involved in trap: Grandpa, Mom, Dad, brothers and sisters,” he said. “It’s a family event. They can shoot as a family, and they can do it all of their lives. Girls can do it. Boys can do it. Kids of all physical abilities can do it. At the end of the day it makes you proud to be a part of it.”

The Cornhusker Trapshoot is open nationwide to all shooters in grades 6-12. Last year, the event drew 947 junior high and 1,585 senior high shooters.

The NTA home grounds are located 3 miles south of Interstate 80 exit 312 on U.S. 281. The Nebraska Game and Parks Commission and the NTA are hosts. 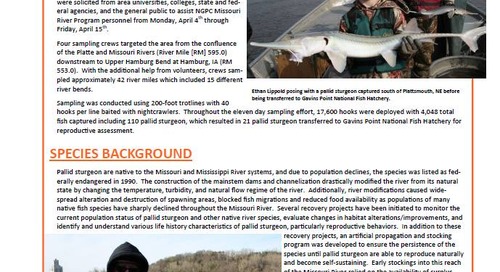 Just got the newsletter on this spring’s efforts to collect adult endangered pallid sturgeon and I want to ...