Home » NEBRASKAland Magazine » “Yes, We Have No Muskellunge”
× Share this Article

“Yes, We Have No Muskellunge”

The internet is a funny place, but you know you can believe everything you see and hear there. . . .

Recently, I was admiring some photos and the stories that went along with them about some really nice muskies that had been caught and released.  Yes, I was jealous especially knowing they had been caught from a Nebraska waterbody.  Somewhere in the discussion that followed someone asked, “Which state?”, as in “surely those had to be caught from someplace like Minnesota or Wisconsin”.  I do not know if the inquirer was shocked when the answer came back, “Nebraska”!

Don’t believe me?  Well, with my recent muskie success, I would not believe me.  So, how about this?

Once again, believe it or not, all of those muskies were caught and released in one day, and they were caught from a Nebraska waterbody!

Many of you will recognize the waterbody, and in fact, many of you will know exactly where some of those fish were caught.  Again I am not trying to be evasive, but if you are wondering which waterbody it might have been, it was listed in the 2018 Fishing Forecast!

Even though I have not been catching them, I love those reports, love the photos, love the videos!  It keeps me motivated, and it is only a matter of time until I hook up again, yes, in Nebraska! The post “Yes, We Have No Muskellunge” appeared first on NEBRASKALand Magazine. 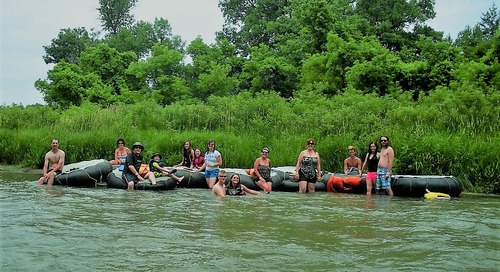 Leisurely floating on one of Nebraska’s many scenic rivers or streams in an inflated inner tube is a cool, ...