LINCOLN, Neb. – The Nebraska Game and Parks Commission will consider a staff recommendation to approve a proposed 2019 mountain lion season when it meets June 22 in Ogallala.

The meeting will begin at 8 a.m. at the Mid-Plains Community College conference room, 512 East B St. A public hearing on the mountain lion recommendation will begin at 9 a.m.

In other business, the Commission will consider recommendations to:

— ban the importation and possession of mouflon and aoudad, or any of their hybrids or subspecies, in Banner, Box Butte, Cheyenne, Dawes, Kimball, Morrill, Scotts Bluff, Sheridan and Sioux counties after June 22, 2018. Mouflon is a sheep species from southwestern Asia. Aoudad is a goat-like mammal native to North Africa. This recommendation includes a provision for grandfathering possession, as well as a protocol for escaped animals.

Also on the agenda is a public hearing for input regarding the listing and delisting of state threatened and endangered species in the Commission’s District 7 in western Nebraska.

The meeting also will include reports on the recreational resources in the Lake McConaughy region and environmental issues.

A complete meeting agenda is available at outdoornebraska.gov/commissioners.

LINCOLN, Neb. – Send in your vote to nominate Lake Ogallala as one of the Top 10 Mom-Approved Places to Fis... 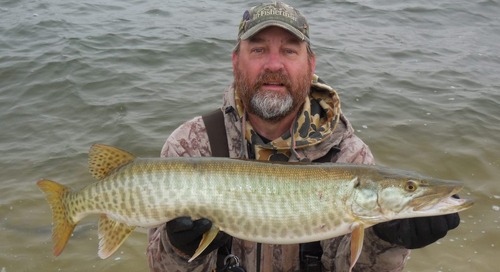 “Yes, We Have No Muskellunge”

The internet is a funny place, but you know you can believe everything you see and hear there. . . . Recent...