Home » NEBRASKAland Magazine » Why Yes, I do speak Turkese
× Share this Article

Why Yes, I do speak Turkese

I probably have too much clutter on my dresser.  One thing you can find in the junk and trinkets piled there is my very first turkey call.

An instrument of torture.

I did not start hunting turkeys until I was in college.  Still, that was a few days ago.  In preparation for that inaugural spring turkey hunt, my cousin Robin gave me my first turkey call.  As I recall it was a Christmas present.  It was a mouth diaphragm call, and at the time there were darned few of those on the market.  This one was nothing more than a latex reed stretched between a small metal frame.  It was nothing like the dozens, hundreds, of diaphragm mouth calls available now.

If you have played with any mouth calls, diaphragm calls, you know the first thing you have to do is get over the gag reflex.  That can be done.  But then, as you can see, that old mouth call was nothing but a shiny metal frame that I tongued to the roof of my mouth.  It was worse than having braces.

I had months to practice, and somehow I learned to squawk somewhat like a turkey using that call.  I even called in a Tom for my Dad the day we killed our first ever turkeys.  I wonder what I really sounded like back then?

I will tell you that calling is the most overrated part of being a successful spring turkey hunter.  The key to success is scouting, scouting and more scouting.  You cannot call a turkey where it does not want to go–better know where they want to be.

Having said that, calling is THE quintessential part of spring turkey hunting!  There is nothing like using a call to bring any game to you, but it ramps up even more with turkeys as you can have a conversation with them!  What we are talking about I have no idea, pretty sure it has to do with pecking order and “hooking up”.  Maybe I would be embarrassed if I actually knew what the conversation was?  I do know the gobbler’s faces turn red.

All I know is when I call and a gobbler answers, well, that is just about the best hunting experience I have ever had.  I cannot get enough of it.  When that gobbler keeps talking and then ends up standing in front of me, well, I start to get jittery just thinking about it!

Male or Tom turkeys are the target of spring turkey hunting.  Oh sure, the rare bearded hen is considered legal game too, but for me it will be a mature Tom or nothing.  You might think that I am always trying to call a Tom, and that is true, I am.  But, I would much rather fire up an argument with a dominant, boss hen–get her making a racket and coming to me, and then you never know whom she will drag in with her.  Oftentimes toms will gobble at your calling, but the way the “birds and bees” really work for turkeys is for the Tom to gobble and strut attracting willing hens to him.  The calling done in the spring turkey woods goes against that natural order of things.  It can work–works even better when you can call in a loud-mouth hen.

So, besides being obsessed with decoys, turkey hunters are obsessed with calls.  Here is the battery that will be on my body or in my vest every time I sneak into the spring turkey “woods”. There is a box call.  I have carried as many as two box calls, but then decided that I hardly ever use one.  I always think box calls sound like, well, box calls, but they work, and I have seen windy days in big country when a loud ole box call was the only thing they could hear.  My Uncle Ivan used to carry one that had a striker lid on it the size of a canoe paddle.  It was like E. F. Hutton, when my uncle stroked out a few notes on it, the turkeys listened!

I love “slate” calls for purrs and soft-calling.  The one in the photo is not actually slate, but aluminum.  “Slate” calls, “pot and peg” calls, are now made with a variety of surfaces and I have tried pretty much all of them.  Some I like better than others, I carry one for awhile and then switch it out for another; they will all work.  Of course I gotta have a bunch of different strikers with me just to mix up the sounds.  Some of them work better than others too.

That wing bone yelper is usually hanging around my neck.  Yep, the wing bones were from a turkey I whacked, and the call carries more sentimental value for me because my cousin made it.  He did the bead-work (or maybe his wife, Theresa), look close, it is a turkey feather in the middle.  I will admit the ole wing bone yelper does not get used a lot, but once in awhile I will pull it out and kiss on it.  There have been times when that nasally sound was the exact imitation that the turkeys wanted to hear!

I can and have called turkeys with all of those calls.  But, my favorite, the one I am most proficient with, and the one I have the most confidence in would still be a mouth call.  Yep, mouth diaphragm calls are the most difficult to master and they definitely take more practice.  But, once accomplished, a mouth call can be used to imitate any sound a wild turkey can make.  Best of all, that can be done without moving your hands.  I would hate to think how many different mouth calls have been in my mouth and for how many hours, days, I have spent sucking on them.  The turkeys would hate to think how many of their brethren have rolled over onto the ground for the last time after I “putt-ed” on a mouth call to get them to stick their heads up in the air for a clear shot.  It has been more than a couple. If you are learning to call, whatever your call of choice, practice.  I will tell you that the worst turkey sounds I have heard have come from the turkeys themselves, so you do not have to sound perfect.  But, the more you practice the better you will sound and more importantly the more confident you will be.  Learn to make a good “yelp” and then expand from there.  If all you ever learn is a “yelp”, that will work, but if you can master other calls, you will sound more realistic and in different situations, different sounds will make a difference!  Ha.

Wanna start to learn Turkese?  Take a listen HERE and then start practicing.

I hear a turkey now, he is saying something about wanting a date tonight.  I gotta go!

The post Why Yes, I do speak Turkese appeared first on NEBRASKALand Magazine. 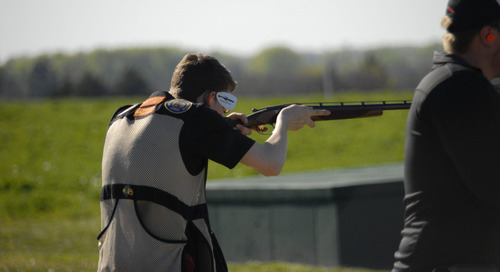 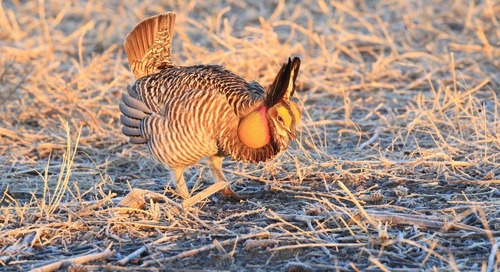 Dancing on the prairies

It has been another great year of viewing prairie chickens and sharp-tailed grouse as they performed their ...