Wanna share with you some things I have been seeing on the interwebby lately.  Blue catfish are the coolest of our large catfish species.  When I say that I do not mean they wear shades, I mean they are the most active in cold water.  Sure, we get some excellent channel catfish fishing around Nebraska as soon as the ice is gone, and channels can be dried off through the ice too.  But, big predatory blue catfish are actually very active and very catchable in cold water.

I have often said that the channelized portion of the Missouri River in Nebraska is pretty much a big ditch.  There are an endless series of wing dikes and some more natural habitats, more and more all the time, but a lot of the channelized Missouri is very fast current and deep water.  Good thing blue catfish love that kind of habitat!

So, I am thinking pretty much every year I hear of at least one exceptional-sized blue catfish that comes from the “lower” stretch of Missouri River in Nebraska, and when I do, I usually share it here on my blog.  Have heard of some exceptional blues already this spring!  Here is a picture that made the rounds a couple weeks ago: Here it is on FaceBook if you have not already seen it.  If you want to read the whole story, it was featured in Catfish Now Digital Magazine.

Some vital statistics on that fish if you did not read the details already:  It was 55 inches long, 41-inch girth, and bottomed a 90-pound scale.  Our hook & line state record for blue catfish stands at 100 pounds 8 ounces, and I am betting that fish would have been a new state record if it had been certified.

But, here is the best part–It was released!  The angler knew it potentially was a new state record, but did not want to put the fish through the stress and possible sacrifice to have it certified, so it was measured, a few photos snapped, and back into the Mighty Mo!  I would say he can brag about catching, and releasing, the Nebraska state record blue catfish.  Well done and congratulations!

Many times catching fish ain’t as complicated as some anglers make it out to be.  For blue catfish, most of the time, putting some fresh cutbait in front of their faces will get some action.  The only thing to figure out in that system is how much and what type of weight is necessary for the water being fished.

Take a gander at this video, also shot on Nebraska’s Missouri River, and you will get the idea (NOTE:  When you start watching the guys are talking about Kansas, just keep watching, they quickly leave Kansas and end up in Nebraska).

There are some amazing fish swimming in Nebraska’s waters.  Besides the Missouri River, if you are looking for some ideas on where to fish for blue cats, I would start with the 2017 Fishing Forecast.  The only thing I know for sure is that you cannot catch them sitting at home on the couch.  GO FISH! 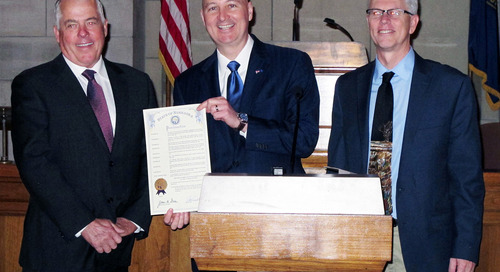