LINCOLN, Neb. – Gov. Pete Ricketts signed a proclamation on April 12 declaring that Nebraska is the Best Turkey Hunting Destination in the United States.

The governor signed the proclamation in a ceremony at the Nebraska Capitol and presented it to Nebraska Game and Parks Commission Deputy Director Tim McCoy and District 1 Commissioner Dan Kreitman of Wahoo (southeastern Nebraska). In return, Kreitman presented the governor a turkey call, which he vowed to use on an upcoming turkey hunt.

In a recent survey, 90 percent of respondent Nebraska turkey hunters stated they had a satisfying experience. Several factors contribute to hunters’ fondness of turkey hunting in the Cornhusker State:

— Nebraska has an abundant turkey population, with hunting opportunities in all 93 counties. Parts of the state have opportunities for the highly sought-after Merriam’s.

— Turkey hunting is popular with out-of-state hunters. In 2016, 42,431 turkey hunting permits were sold in Nebraska. Of those, 14,191 were sold to nonresidents.

— Nebraska turkey hunters can enjoy seasons of up to 68 days in the spring and 139 days in the fall, with spring archers getting a longer season. The spring archery season is in progress. Spring shotgun season begins April 15. All spring turkey seasons close May 31.

— Turkey hunting is allowed statewide. More than 400,000 acres of land are open to public hunting in the state.

— An unlimited number of turkey permits are available. A person may purchase up to three permits for the spring season and up to two for the fall season.

Hunting is big business in Nebraska. It has an $848 million annual financial impact in the state, fueling the economy of towns large and small. It also brings family and friends together in a way that encourages appreciation for the natural world.

LINCOLN, Neb. – Turkey hunting is challenging and fun, and a great way to spend a spring day with family or... 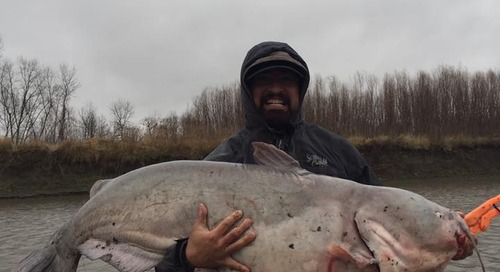 Wanna share with you some things I have been seeing on the interwebby lately.  Blue catfish are the coolest...