Home » NEBRASKAland Magazine » What Are They?
× Share this Article

Once in awhile I still get to play a part as a fisheries biologist when folks ask me to assist in the identification of “mystery” fish they have caught.  On rarer occasions I am asked to help identify even more obscure aquatic critters.  One of those occasions happened a few weeks ago when I took a phone call from a gentleman.  I had met this gentleman recently in person when he brought in a state record fish for certification.  I will tell you more about that fish in a future blog post.

Anyway, identifying any fish or aquatic organism over the phone can be darned near impossible.  It is much easier if I can see at least one photo.  In this case the gentleman went back out, grabbed another net-full of the critters and snapped some photos.  Here is what he sent me:

Here is a closer look:

Over the phone, we talked about things like amphipods and tadpole shrimp, but neither of those sounded right to him.  When I saw the photos I immediately had a pretty good idea, but I double-checked with one of my co-workers here in Game & Parks Commission headquarters to be sure.

Got an idea of what they were?

Time is up, time for an answer:

They were brine shrimp!

Brine shrimp are common in some of the alkaline (i.e. salty) Nebraska sandhill lakes.  Some of those waters are so alkaline that they can support no fish, but are loaded with things like brine shrimp and larval salamanders.

These particular brine shrimp were collected from a small depression, pond, in the middle of some native grass in Pawnee County.  That pond also has no fish, if fish are present they would have eaten all the tasty little brine shrimp.  The pond owner noted that the pond has held water consistently in recent years, but may have been completely dry back in 2012 when we had drought conditions.

If any of you have purchased “sea monkey” eggs, you know that those brine shrimp eggs can lie dormant, completely dry, for a long time.  Add water and the right habitat conditions and Voila, brine shrimp!  I have no idea how long brine shrimp may have been present in a small Pawnee County pond, nor how they might have got there, but I found it very interesting that they were there!

Some days I never know what might come up at work!

The post What Are They? appeared first on NEBRASKALand Magazine.

LINCOLN, Neb. – Nebraska has joined the Interstate Wildlife Violator Compact, which is an agreement that re... 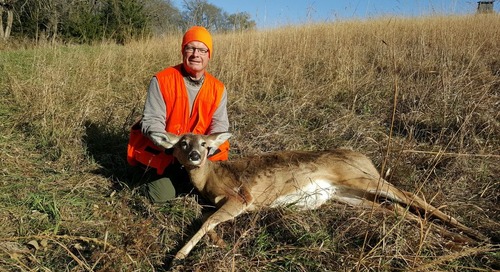 You are a deer hunter, and you have just harvested a very nice white-tailed buck, or perhaps a gorgeous doe...