LINCOLN, Neb. – The conditions of wetlands across the state are varied, according to the Nebraska Game and Parks Commission.

On Sept. 1, Game and Parks released a report on the status of Rainwater Basin wetlands, as well as pumping plans for the teal season. While conditions were good in some areas, they were dry in others.

“Some areas have received a lot of rain, especially in the eastern Rainwater Basin north of Interstate 80 and the southwest part of the basin around Holdrege,” said Ted LaGrange, Game and Parks’ wetland program manager. “Conditions in Fillmore and Clay counties are drier, but spotty.

“Hunters need to keep in mind that conditions can change quickly if we get a significant rain event and they should scout areas ahead of time,” LaGrange said. “We are pumping some wetlands ahead of the teal season and more as needed for the regular duck season.”

The teal season is Sept. 2-10 in the High Plains Zone and Sept. 2-17 in the Low Plains Zone. Regular duck seasons open in October.

Outside of the Rainwater Basin, the following areas will be pumped: Elk Point Bend WMA, Dixon and Wilkinson WMA, Platte.

In addition to providing places to hunt waterfowl, wetlands are pumped to provide habitat for migrating waterfowl and other water birds, to provide areas for people to observe wildlife, and to spread out the distribution of migrating birds to reduce the possibility of disease outbreaks.

The wetland condition and pumping plans information will be updated periodically throughout the duck season. View the report at OutdoorNebraska.gov/waterfowlchecklist. Visit OutdoorNebraska.org for more information on waterfowl hunting and to purchase permits and stamps. 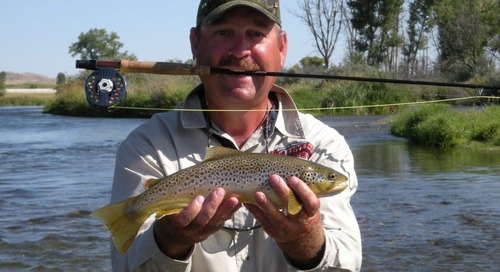 Fly Fishing is a Joke

If you read my blog post earlier this week, you know that I just got back from a week fishing with family i...