The result of all of that water has been high water levels in rivers, streams, lakes, reservoirs, pits and ponds, and in fact many of those waterbodies have experienced flooding this year.  We all know that there have been some devastating consequences to that flooding and many folks have suffered loss.  It is always hard to address what the impacts are to our state’s aquatic habitats and fisheries knowing that the personal loss has been so great for so many.  I do not want to minimize that in any way, but let me make a few comments about the impacts of high waters, flood events, on our aquatic resources.

First, I have published several updates this year on the impacts of high waters and flooding to several of our public fishing waters.  It seems like some of those “hits” have just kept coming.  Yes, we have seen major impacts to infrastructure, things like washed-out roads, and in some cases damaged boat ramps, or at the least, boat ramps with debris on them. Recovery and repair of some of those areas and features are going to take some time, days, weeks, maybe even months in some cases. High water events can also result in fish movements into and out of Nebraska reservoirs.  On our largest reservoirs, irrigation reservoirs, fish are continually moving with water into and out of those waterbodies, but one can expect that the more water that is moving, the more fish that are also moving.  Smaller, flood control reservoirs experience less water flowing through and less fish moving in and out under normal conditions, but during high water events there can be increased fish movement.  The greatest risk during high water events comes from unwanted species of fish in a watershed moving downstream into reservoirs .  On the other hand, fortunately, fish movements up into reservoirs from downstream are prevented by the dam structures.

Invasion of unwanted fish species is particularly a problem for the many pits adjacent to Nebraska rivers.  When those pits flood, most resident fish may stay put and ride out the high water, but flood waters almost always bring unwanted species looking for new habitats to invade.  The extent of invading undesirable species may vary from one pit to another, but in the worse cases, chemical renovations may be needed in order to return those pits to their former productivity as sport fisheries. No doubt the floods of 2019 will be remembered for years to come.  This is a year we will never forget.  Many of those memories will be painful, but there are some silver linings to the many storm clouds we have seen in Nebraska this year.  We come from hardy stock, stock that has survived blizzards, floods, storms and droughts for many years, and we are going to survive this year’s too.  We will look forward to better days ahead, and although there will be changes and challenges, that will include some better fishing too! 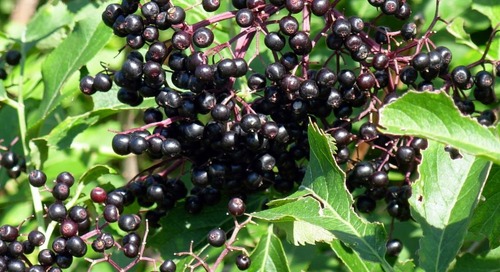 A Berry Good Time Of Year In Nebraska

I always get rather impatient this time of year. Is it the hunting seasons that are forthcoming? No, not re...