I believe from the moment we are born we have this desire to be independent, on-our-own, free.  Those of us who recognize the hunter and fisher in our human DNA feel the urge even more.  We start our adventure into independence by rolling, scooting, and crawling, but that is not enough.  We walk as soon as possible and then comes that glorious day when we master some form of mechanical transportation.  For must of us that was a tricycle followed soon by one less wheel–a bicycle.  And then we were off, figuring out how we could use that transportation to get to one of our favorite fishing holes.

My cousin Robin used to pump himself and me on a sandy trail beside an old railroad track to one of our favorite spots on Minnechaduza Creek.  I like saying “Minnechaduza”.  That is a proper name for a creek, for a fishing destination.  I am told that “Minnechaduza” is a Lakota word for murmuring water.  Perfect.  I imagine Lakota boys used to catch Chubs from the Minnechaduza too.

I would sit on the banana seat of Robin’s old bike, holding fishing poles and tackle boxes in both hands while my older cousin stood and pumped on those pedals for all he was worth.  I could not stay in the saddle by grabbing the bike with my feet or legs because that would surely put my pant legs in the chain, so I mastered a banana seat, cheek-squeezing technique.  In town, on paved streets, Robin would take perverse pleasure in trying to throw me from the handlebars or back of his bike while he pedaled at highway speeds.  Have you ever bailed off the back of a bicycle going so fast that your legs could not keep up?  How about flew off the handlebars into a bush?  We were bored in town, but when we were on a fishing trip, it was all business.  Well, most of the time.

I have a hard time keeping up with my older cousin to this day.  I joke that he is a hundred yards up the first hill ahead of me by the time I get out of the Jeep.  Thinking back, I marvel at how in the world he could pump the two of us on those sandy trails.  I believe he really, really wanted to take me fishing with him.  I am glad, because there was no place on earth I would have rather been.

The fish we caught were not large and in fact they were just minnows, Creek Chubs.  We called ’em “horny heads” because they had sharp little bumps all over their heads.  All these years and university classes later I know that there actually is a species of Chub called Hornyhead, but that is not what we were catching.  We were catching the Creek Chubs that are common to creeks all over Nebraska; more specifically we were catching spawning, male Creek Chubs with “nuptial tubercles”.  Growing up and going to school you learn big words like that, even learn what they mean.

Back at home, my summers were spent pedaling to the river to spear Common Carp or out to the canal to catch Smallmouth Bass.  I wonder if the city police would allow a young jouster carrying a trident on a wooden pole to bike down city streets on his way to the river these days?

My hoarding of fishing tackle started early in life and to pedal my bicycle and all my gear to my Smallmouth waters I had to figure out a way to attach everything to the bike.  Unlike when my cousin was pedaling, I had to have my hands on the handlebars when I was by myself.  The solution was easy. . . .

Besides fishing tackle, I have always had an obsession with rubber bands; I still proudly display the Boone & Crockett blow fly I took with a single, 32-caliber, rubber band shot from a distance of 30 inches.  With a pocket full of rubber bands, I could figure out a way to attach a bass boat to the space shuttle, let alone a tackle box and spinning rod to my bike.

Eventually, the day comes when we are tossed the keys and given permission to drive the family roadster or father’s pickup.  Oh, how liberating that was to jump in the old Ford pickup and set off on my own on some hunting, trapping or fishing adventure.  Unfortunately, I was forced to remember I was not so independent when I got stuck or flooded the darned thing (the pickup had a manual choke and I never did quite master that).  When that happened, sometimes I just crawled in the back and spent the night–the pickup would start in the morning.  There were no such thing as “cell phone” back in those prehistoric times, and for some reason, when I did not return home by the appointed hour, my sister and parents did not react to the situation as casually as I did.

I have a driver’s license and even owned several of my own motor vehicles since then.  Most all of them could tell stories of fishing adventures all over Nebraska and beyond.  They all have hauled an old fisherman and his partners home, grinning ear-to-ear, after some particularly productive days on the water.  But, even with our reliance on a variety of 4-wheeled chariots, I have not forgotten my trusty ole two-wheelers, and they have gotten me into less trouble.

I still have an old bicycle in the garage.  I have graduated from rubber-banding tackle and rods to bike frames, or did I just get to the point where I had even more tackle and fishing poles?  The rusty ole bike now has a couple of rod holders hose-clamped to the frame; one for a landing net, the other for a spinning rod.  With that bike I could put my waders on, sling a tackle bag around my neck and reach distant wind-blown shorelines where others only dreamed of tossing baits.  Ever rode a bike along the top of a soil-cement dam in the middle of the night?  While wearing neoprene waders?  “Hot Yoga”?  Pish-posh. Everyone knows that the best fishing spots are off the beaten path.  Thank goodness we have wheels to get us there. 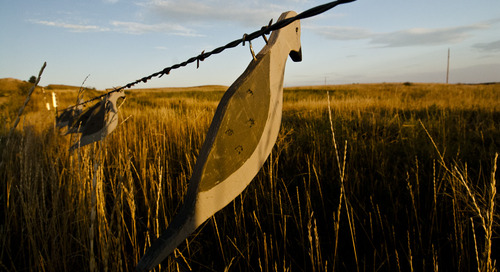 Each September, I get a subtle first-hand reminder of the influence of the Nebraska Game and Parks Commissi...