There is no doubt that crappies are a popular fish in the spring.  They can be relatively easy to catch, accessible to every angler, even those fishing from the shore, and tasty on the table.  Given some warm spring weather, which we have finally seen the past few days, and folks are out to catch crappies.  But, there are a lot of misconceptions about crappies in the spring, and clearing some of those up might help you catch even more during this peak time.

A few years ago I heard someone say that the crappies were finally putting on their tuxedos for the spawn.  I liked that description because it is very true, very appropriate.  What does it mean?

It means that crappies, especially the males, get dark, black, put on their dark formal colors during the spawn.  I bring this up because many anglers believe crappies move shallow to spawn in early spring.  They move shallow, in fact will do so right after ice out, but those early movements are into shallow water, usually in protected areas like bays and coves, where they can find some warmer water and prey to eat.  Given a spring cold front or even one of the spring snowstorms we had this year, and those crappies may drop back into deeper water until it begins to warm again.

The actual spawn period is weeks after ice-out for crappies.  However, in many waters, the habitats crappies use in early spring may be the same habitats they eventually use for spawning.  So, yes, the crappies may move shallow soon after ice-out and stay in or near those areas for weeks until the spawn is complete, but they are not spawning when they first move shallow each spring.

How do you know when they are spawning? Yes, that is a black crappie, likely a male, and that male is sporting its “tuxedo” or spawning colors.

But, do not think that only the black crappies get dark during the spawn.  White crappies darken too, again especially the males.  So, white crappies can be very black in coloration as well.

I must also tell you that the two crappie species will hybridize, and then your guess is as good as mine unless we have DNA analysis done.  I just count the dorsal spines and “call ’em the way I see ’em”.

Male crappies will build and guard nests.  They will be very much “anchored” to that spawning territory during that time and will defend it from other males while trying to herd females onto the nests to spawn.  I will always tell you that during the actual spawn period, fishing for any species will tend to lag as the fish are more concerned with reproduction than with feeding.  That is also true for crappies, but certainly they can be caught during the actual spawn.  Just know this, during the spawn, those fish are not going to move far or fast to take a bait.  The bite will slow during the spawn, but if you present baits on specific spots where there are spawning crappies, and keep the baits on those spots, fish can still be caught.  As the spawn approaches, you might catch crappies in the same areas you have earlier in spring, but you might have to be more exact in your presentation–slow down, fish specific cover objects as male crappies will often build nests adjacent to some form of cover.  A good way to present baits slower is to use a bobber or float, and by the way, cane poles or something similar can be THE best tool for catching crappies in many situations.

Not all crappies spawn at the same time, even on the same body of water.  Crappies in shallow water bays and coves may spawn a week or two sooner than crappies using shorelines on the main portion of the lake or reservoir.  Knowing this you might be able to switch locations and target fish that are more likely to bite.

Another couple facts about crappie spawning biology I will mention:  First is that crappies can be sexually mature at a very small size and very young age.  Crappies only a few inches long and a year or two old may be fully capable of spawning.  That is why anglers accomplish very little when it comes to controlling over-population and stunting of panfish populations–the numbers of those fish have to be reduced when the fish are still very small and very young, way smaller than those fish anglers will harvest.  Predator fish like largemouth bass are THE control agent for stunted panfish in many waters.

Secondly, female crappies are partial spawners.  They may deposit most of their eggs during the spawn, but they do not necessarily deposit all of them at once.  In fact, after the spawn is complete it is not unusual to see female crappies that will still be carrying some eggs.  Every year I hear from panicked anglers about crappies carrying eggs after the spawn thinking that the crappies did not spawn that year!  That is not the case at all and those females likely deposited thousands of eggs; they just might re-absorb a few when they are all done.

Crappies certainly are a prolific panfish species in most Nebraska waters and can withstand some harvest.  Anglers should take some crappies home to eat; they taste really good and are good for you!  However, big fish are hard to catch not because they are so smart, but because they are so rare.  Panfish populations absolutely can be over-fished and that is exhibited in many cases when no panfish reach large size.  Admittedly, there are a host of factors that influence crappie growth rates, life span, and potential size, but it is a sure bet that a big crappie in Nebraska, a fish 12 inches and larger, is a rare fish.  Plan to harvest a mess of 10-inch crappies for a meal of fresh fish, but if you catch some slabs, some crappies as big as trash can lids, take some pictures and turn ’em loose.  Your fishing and my fishing will be better if you do. 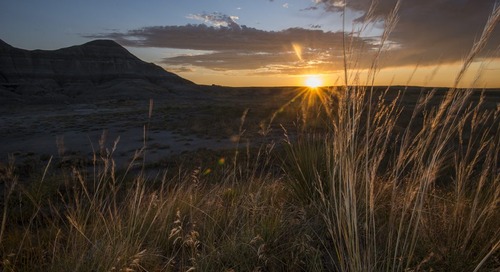 In the May issue of NEBRASKAland Magazine, you will find a story and photos about one of my favorite places...

Fish May and June for hot walleye action

LINCOLN, Neb. – May and June are the best months for walleye fishing in Nebraska. Those two months produce ...