Fish May and June for hot walleye action

LINCOLN, Neb. – May and June are the best months for walleye fishing in Nebraska. Those two months produce more walleyes for anglers than the rest of the year on every walleye water in the state.

“Part of the reason for that is that there are more anglers fishing during those months, but they are fishing because they know the walleyes will be biting,” said Daryl Bauer, fisheries outreach program manager for the Nebraska Game and Parks Commission.

Walleyes spawn in April in Nebraska. Even though anglers can catch some fish during the spawn period, the fish are more interested in reproduction than in finding food. All that changes when the walleyes finish spawning and go on the hunt.

Walleyes scatter after the spawn. Until the annual surplus of natural baitfish becomes available later in summer, post-spawn walleyes feed on a variety of prey. The result is that walleyes can be caught from shallow to deep on a variety of traditional walleye baits.

Everything from drifted live-bait rigs, to trolled crankbaits, to casted jigs, and even live baits fished below slip bobbers can catch walleyes during May and June. The best presentation will depend on the fishing conditions and amount of water to cover. Walleyes still can be found relatively shallow after the spawn. Do not assume they are all in deep water.

“Walleyes are low-light predators,” Bauer said. “Always look for any conditions that may reduce the amount of light penetrating into the water. A good chop on the water is a walleye angler’s best friend.”

Large bodies of water are the best walleye habitats, making Nebraska’s large reservoirs the state’s best walleye fishing. However, anglers still will find additional opportunities to catch a few walleyes on many of the smaller reservoirs throughout the state.

The post Fish May and June for hot walleye action appeared first on NEBRASKALand Magazine. 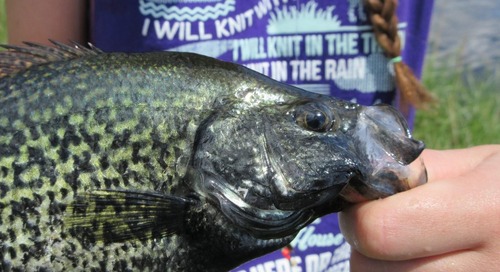 There is no doubt that crappies are a popular fish in the spring.  They can be relatively easy to catch, ac...

LINCOLN, Neb. – The Nebraska Game and Parks Commission will host a public meeting to gather input on huntin...