— Nicholas Batt of Elkhorn set a hook-and-line record April 12 when he caught a 3-pound, 1-ounce tiger trout on a night crawler while fishing the North Platte River below Lake Ogallala.

“Tiger trout are a brown trout/brook trout hybrid. The growth potential for tiger trout is still much more than 3 pounds,” said Daryl Bauer, Game and Parks’ fisheries outreach program manager. “I suspect we are going to see our tiger trout records continue to climb.”

— John Vrtiska of Cedar Creek has the surface spearfishing record for silver carp. He speared a 6-pound, 10-ounce fish in May on the Missouri River. He had set the record earlier in May at the same location with a 4-pound, 11-ounce silver carp.

— Eric Einspahr of Lincoln has the hook-and-line record for silver carp after catching a 7-pound, 5-ounce fish on the Missouri in May. He was fly-fishing a No. 12 Brassie. Vrtiska and Einspahr had become fishing friends. In fact, Vrtiska shared his fishing spot on the Missouri with Einspahr, who on May 12 set the initial silver carp hook-and-line state record at 3 pounds, 14 ounces. A week later, Vrtiska took a fly rod to the same Missouri River site and topped Einspahr’s record with a 4-pound, 3-inch fish caught on a Copper John. Two nights later, Einspahr returned and set the most recent record.

“Certainly, silver carp can get a lot bigger than that, so we will see how long Eric’s record will stand,” Bauer said. “I am betting it is going to go higher, maybe much higher.”

Check out the 2018 Fishing Guide for a complete list of record fish.

LINCOLN, Neb. – The die-off of white bass May 26 at Lake Maloney was not the result of any infectious disea... 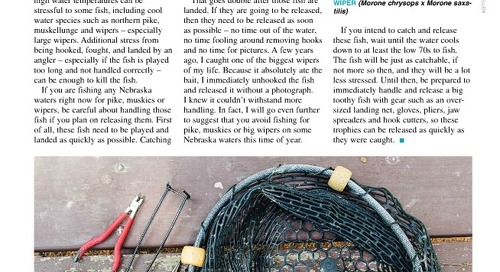 Water temperatures are at or near their peak in many Nebraska waters right now, and they are going to stay ...