Water temperatures are at or near their peak in many Nebraska waters right now, and they are going to stay that way for the next several weeks.  That means your fish handling skills have to be at their best right now–a released fish does no one any good if it perishes.  I have blogged extensively about fish handling and catch & release in the past; the July 2018 NEBRASKAland uses some of that material and is a nice reminder! My son and I will not even target muskies or pike now until the water begins to cool in September.  We may slip in some wiper fishing and that can be very good during the heat of July and August, but you better believe those fish get landed as quickly as possible, no playing around with ultralight equipment, left in the water as much as possible, and released back into that water immediately!  Busted a wiper this past week that never left the water in the short time it took to land, unhook, photo, and release! In fact, now that I look at it, maybe I should have taken a little more time to get a photo that was not blurry?  Need some more work with the new camera.

While your leafing through the current issue of NEBRASKAland, notice the wealth of other good stories there!  There is a good one on tuning spinnerbaits and buzzbaits, one on sharpening knives, fish ladders, and a whole lot more! 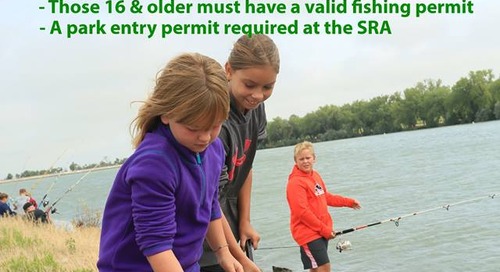 Another of our carp carnivals this weekend! Some more information in the news release: Carp-O-Rama event co...