To encourage forest health and improve wildlife habitat, the Nebraska Game and Parks Commission has contracted the thinning of ponderosa pine trees in a 97-acre portion of the 22,000-acre park. Most of the thinning area is on property that surrounds Saddle Rock, the prominent landform at the eastern end of the Red Cloud Buttes. About 20 acres of the thinning area are in two drainages below the buttes. The project will begin this month and is scheduled to be completed by the end of March.

Shelley Steffl, the Commission biologist who spearheaded the project, said the area is due for treatment.

“This area may have been logged back in the early 1900s when Fort Robinson was a military post, but since then hasn’t heard the sound of many chainsaws,” Steffl said.

A number of the mature pines in the project area will be left standing in small groups for diverse wildlife usage and to produce seeds for regeneration, she said. Pine removal in the low-lying drainages will promote the growth and diversity of wildlife-friendly deciduous trees and shrubs. The plan also calls for leaving big dead trees, known as snags, which are popular among cavity nesting birds, bats and other wildlife.

The project is designed to help a number of wildlife species identified as endangered or at-risk. They include bat species such as the fringe-tailed myotis, long-legged myotis and federally listed northern long-eared bat. The restored habitat also will be more suitable for birds such as black-billed magpies, pinyon jays, Bell’s vireos, pygmy nuthatches and golden eagles. Game species such as mule deer, bighorn sheep and wild turkey also are expected to take a liking to the changes in the area, which is open to hunting.

Once thinned, the forest is expected to be more resistant to disease and catastrophic wildfire. Thinning projects on Nebraska Game and Parks Commission properties and other lands in the Pine Ridge in recent years have helped remedy overgrowth brought on by decades of wildfire suppression. Thinning decreases the risk of complete loss of pines over wide expanses as occurred on thousands of acres in the Pine Ridge in 2012, 2006 and at Fort Robinson in 1989.

Mike Morava, Commission regional park superintendent, said the project will be of benefit to all park users and will help protect the city of Crawford, about half of a mile away, from wildfire.

“Park visitors, wildlife, hunters, local residents – they all ought to be happy with this,” Morava said.

The project is being completed with a State Wildlife Grant from the U.S. Fish & Wildlife Service’s Wildlife and Sport Fish Restoration Program. Matching funds were provided by the Nebraska Environmental Trust and National Wild Turkey Federation. 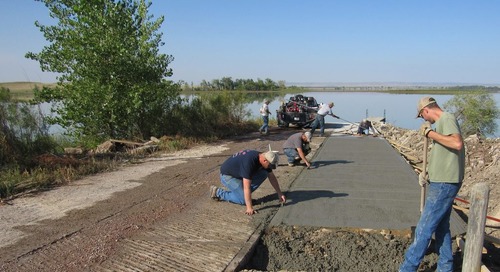 CHADRON, Neb. — Boaters at Whitney Lake Wildlife Management Area should have an easier time getting on and ...