Controlled shooting areas are a mystery to many hunters. Defined as a private location leased or owned by an individual or group to hunt upland birds like ring-necked pheasants, quail, chukars, Hungarian partridge, and even mallards, during an extended season – they are often viewed as hunting spots for the inexperienced.

When I started at Nebraskaland in 2006, I didn’t see what a controlled shooting area offered to an experienced, able-bodied hunter like myself. After visiting some – and talking to hunters who had visited others – I discovered these areas offer much more than I thought.

So All Can Hunt

My first introduction to a controlled shooting area was during the fall of 2006 when I photographed a Sportsmen Assisting Nebraska’s Disabled Sportsmen (SANDS) hunt at Pheasant Bonanza near Tekamah. Participants who couldn’t walk far – or at all – were able to watch excellent pointing dogs work, see flushing birds, and even shoot pheasants on the rise.

That day, I realized that other hunters’ needs were different than my own, an important idea to the owners of these establishments. “We continue to provide hunts for people who need assistance like this,” said Pheasant Bonanza owner Trent Leichleiter. “We don’t want to turn anyone down. For example, maybe we have a person whose dad introduced them to hunting and can’t get around like he used to. We want to make sure we have opportunities for those hunters as well.”

Some controlled shooting areas, like Oak Creek Sporting Club near Brainard, also provide the skills needed before the hunt. When Oak Creek hosts youth days throughout the year – with 4-H groups, trapshooting teams, and the like – participants study hunter safety, watch dog trainers work, learn how to appropriately shoot shotguns and rifles, and actually have an opportunity to hunt pheasants. For many young hunters, it is their first time afield.

“We want to cater to families,” owner Terry Kriz said. “We love seeing people get their first bird. From mothers and daughters to fathers and sons, we want our guests to see action – to provide an environment that is more than a walk in the park.

“We also want to make sure we keep hunting’s legacy moving forward.”

How Do They Fly? This is a question every hunter has about a controlled shooting area: How do the birds fly?

“We don’t raise our own birds at Oak Creek,” said Kriz. “When they arrive they’re released shortly after. They learn to adapt.”

“We cater to ‘your birds are out there; go hunt them’ method,” said Pheasant Bonanza’s Leichleiter. “We want to offer as wild a hunt as possible, and are constantly releasing more birds than people are paying for – some the day of the hunt and some days before a person’s hunt.”

For example, on a 3-bird hunt, Leichleiter and his staff will release six to eight birds. “We want people to see 12 to 15 birds on a 3-bird hunt. And the more wild the hunter’s experience is, the better.” Years ago, on a whim, a few buddies and I took a trip from Tennessee to Kansas to hunt pheasants. Having no idea where to go, we hopped around for two days and never fired a shot.

In hindsight, I wish we would have started at a controlled shooting area. From there, we could have talked to the owners of the area and gotten some advice on which nearby public areas to hunt.

Maybe we would have learned something on that area that helped us on public land. Perhaps we would have shot a few birds. And maybe, just maybe, that same group of guys would still be hunting together.  ■ Choosing a Controlled Shooting Area (CSA) to visit is like picking a dog breed or style of shotgun – you have to find the one that fits your needs. This can be accomplished by speaking to someone at the preserve. Ask about the terrain, the length of the hunts, and exactly what to expect. Tell them if anyone in your group has physical limitations, and they will let you know if they can accommodate you.

Whether it’s a new hunter or a new puppy, there’s only one thing that’s going to get them excited about hunting — birds. That’s why controlled shooting areas are an excellent resource for introducing new hunters and their dogs to the sport. It takes birds to make a bird hunter, and hunting preserves guarantee the birds that will get them excited about hunting. Hunting all morning on a frigid day without finding any birds isn’t motivating for anyone.

These preserves are also a way to keep you and your dogs in shape before and after the hunting season. Heading to a hunting preserve for a few outings before Nebraska’s regular season opens will shake off the rust and ensure you are both in top form when opening day arrives. Then, after your regular hunting season closes, you can venture to a CSA to extend your good time a bit longer.

The post The Value of Controlled Hunts appeared first on Nebraskaland Magazine. It was an unlikely alliance: farmers and bicycle enthusiasts. Both were dissatisfied with the muddy, unimpr... 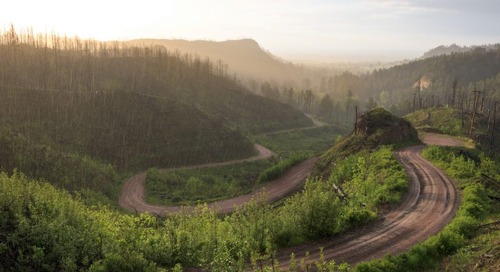 A photographer captures the Pine Ridge’s East Ash Road through the seasons. The first time I laid eyes on t...