Step away from ordinary equipment to fly-fish Nebraska’s trout streams.

Let’s get this out of the way early. When looking for fly-fishing advice, you might want to go elsewhere.

Mind you, I have fly-fished many times, but when it comes to getting serious about catching fish, a spinnerbait or can of nightcrawlers is usually involved.

My fly-fishing dates back to the 1990s when I was gifted a rod-and-reel combo package. As with all fishing, it was fun. Too often, though, I ended up with a wad of line at my feet and frequent instances of both rod and line becoming snared in overhanging branches. After a little dabbling, I always retreated to spinning gear.

The Nebraska Trout Slam, which challenges anglers to catch a rainbow, brook, cutthroat and brown from the state’s waters, inspired me, though. Because I am fortunate enough to live in the Pine Ridge, billed as Nebraska’s only region where all four species can be caught, I figured I should add to the challenge by catching them with a fly rod.

My fly-fishing skills, or lack of them, are often to blame, but I attribute many of my problems to the nature of the streams I fish. While high on aesthetic value, they are not what I would call beginner-friendly. Whenever on one, I am reminded of the words written by the late Pat McManus, the famed humorist for Outdoor Life, as he was distinguishing a “creek” and a “crick.”

“First of all a creek has none of the raucous, vulgar, freewheeling character of a crick,” McManus wrote. “If they were people, creeks would wear tuxedos and amuse themselves with the ballet, opera, and witty conversation; cricks would go around in their undershirts and amuse themselves with the Saturday night fights, taverns, and humorous belching. Creeks would perspire and cricks, sweat. Creeks would smoke pipes; cricks, chew and spit.”

Whether or not our pretty streams deserve such categorization, their narrow turns, overhanging branches and encroaching vegetation pose some special considerations for gear and have surely triggered many a swear word from anglers. After a sizable dose of struggle, I began looking for tips.

For fly-fishing small streams in tight quarters, the experts recommend a light outfit. That is, short rod with light line. Unfortunately, I did not find such a configuration from local retailers. Seems fly rods sold in beginner kits are designed for casting long distances with length of about 9 feet and heavy line. They work well for ponds and rivers, but are overkill and cumbersome for getting around small streams.

My chosen rod became the fiberglass Eagle Claw Featherlight. Available at just 6 feet, 6 inches it works about as well as one could hope for battling the brush. Both its cork handle and $25 price tag, much less than most other fly rods, are attractive features.

Another great suggestion unearthed from my research is the automatic fly reel. While fly-fishing purists may scoff at anything with “automatic” in the name, this is surely the most attractive part of my set-up. Upon a lever pull with the trigger finger, a spring-loaded mechanism quickly spools a pile of slack line piled at your feet – a pile that, as previously mentioned, is sure to become tangled in the tall vegetation characteristic of a “crick.”

A few manufacturers produce automatic fly reels, but the reviews of new products are less favorable than merchandise of yesteryear.

Martin of Mohawk, New York, became the leader in automatic reels in the mid-1900s. Available in both upright and horizontal configurations, the reels came in a variety of sizes and models. On eBay, I found the Martin No. 47 – with patent numbers registered in 1939 and 1942 – for $20.50. Capitalizing on their ingenuity, the company used the same winding mechanism on similar-looking items labeled “dog exercisers.”

When ol’ 47 arrived on my doorstep, I admired its hefty metal build – not an ounce of plastic to be found on an attractive forest green and chrome body. I spooled it with some three-weight floating line, added a tapered leader and gave it a cast. It is hard to imagine that the reel worked any better in 1950 than it does today.

The package’s true test, though, came during its first venture up the middle fork of Soldier Creek in March 2018. There, in a small pocket of water in the shadow from pretty rocks, the first of several brook trout fell victim to this set-up. The joy of succeeding with my new-slash-old “Pine Ridge special” surely matched what I experienced upon catching my first fish with a Zebco spincast in the 1970s.

One parting tip from a struggling fly angler: As with most endeavors, practice pays. Casting a fly rod is a fun thing to do with targets and obstacles, and no trout to spook, in the backyard. Especially work on the roll cast, which will help you get below those snag-inducing branches.

Whether or not I am qualified to give advice for fly-fishing will always be debatable, though. Regardless, a few adjustments to my approach has certainly made my hikes up the creek – or, crick – more enjoyable.  ■ 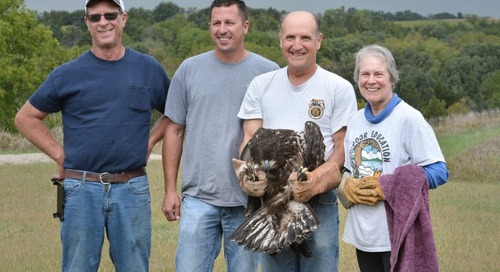 Last spring, I received a call from conservation officer Matt Seitz who asked me to pick up an eagle that h... 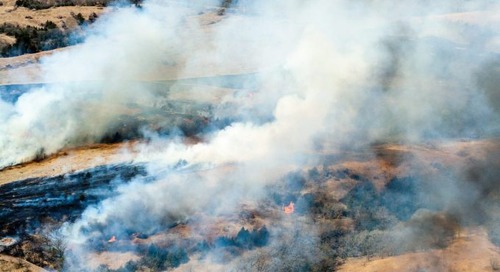 For decades, mechanical removal has been a key strategy to control eastern redcedar, an invasive species sw...