Last spring, I received a call from conservation officer Matt Seitz who asked me to pick up an eagle that had fallen from a nest near Barneston. Although I was on vacation at the time, I couldn’t pass up the opportunity to hold a baby eagle. I said I would get it and went out to meet the farmer who knew where the bird was located.

Gary Remmers was working in his field on April 27 when he noticed something yellow and out of place on the ground. Remmers stopped his tractor and moved closer to inspect. To his astonishment, a large ball of fluff with large talons and a huge bill sat before him. Remmers called his son, Justin, who assisted him with the baby bald eagle. Justin told me that when he got there, he noticed an eagle’s nest 40 feet up in a nearby tree. Adult eagles circled and screamed at them as they picked up the young bird.

Justin agreed to meet me in Wymore. I was expecting to see a small ball of white fluff or a bird that was nearly ready to fledge. I did not expect a prehistoric-looking, chicken-like thing with gray, wool-like feathers covering its body. The baby eagle’s down felt like a sheep’s coat. The bird was calm when we made the transfer at Rex Adams’ home in Wymore. We took a few photos, and from there, I went on my way to Fontenelle Forest’s Raptor Recovery in Elmwood.

Betsy and Doug Finch waited for my arrival. Betsy looked for injuries on the exam table while speaking to the bird in a comforting, assuring tone. It seemed to understand and stood up as tall as it could, spreading its nubby wings as if to say “all good.” Betsy found no injuries, which was amazing since this bird had no wings that could help it to glide down to the ground. To prevent the young bird from imprinting on humans, Betsy fed it a small meal with an adult eagle in view.

Raptor Recovery decided not to return the bird to the nest. For one thing, finding a way to get it there would be a feat, and secondly, we did not know if another eaglet had pushed this bird out of the nest while competing for food. It was lucky to survive one fall without injury. We did not want to take a chance on another one.

For the next few months, Raptor Recovery made sure the eagle stayed healthy and imprinted only on other eagles. In late September, Betsy called to say that the bird was ready for release. She contacted Justin and Gary Remmers as well, and we made plans to meet at a nearby state recreation area. The Remmers said that the eaglet’s family had left the nest on their property and that the birds have been seen at the recreation area. Betsy asked me if I could assist in catching the eagle in its flight pen. Of course, I said yes!

Catching an eagle in a flight pen is always an adventure. Even though this eagle had been saved by humans, it wanted nothing to do with us. When I walked into the flight pen and saw the huge bird, I completely froze – not in fear but in admiration. As it flew overhead, I stood in awe and watched its long wingspan block out the light. The sound of an eagle’s wings moving the air always sends chills down my spine. As I stood by, useless, Betsy, Doug and Brooke Manes caught the bird. Brooke was the first to be able to grab and control its talons; the bird seemingly wanted to eat Brooke’s face. Before leaving Raptor Recovery, volunteers weighed and outfitted the eagle with some “bling” in the form of a leg band. Since its arrival, the eagle grew from 3 to 9½ pounds.

At the state recreation area in Gage County, we met Gary, Justin and Lynn Remmers, as well as a family friend. Rex Adams and CO Seitz also came out to watch. After a few quick photos, we released the eagle.

The moment passed quickly. The bird flew right over us and did not look back. It soared out to the lake, and for a moment, I feared it was going to go into the water. I asked if anyone knew of a boat nearby. The eagle continued to descend toward the water, and to my relief, it hovered just a few inches above the lake, its wingtips even touching the water a couple of times. It was enjoying its freedom. Then it flew to the other side of the lake and landed on the shore. We watched for about 15 minutes, until it got up and took off into a grove of trees where we lost sight.

“Just an eagle.” It was just an eagle that touched a few lives and made friends out of strangers.  ■

Dina Barta has been a conservation officer for the Nebraska Game and Parks Commission since 1992.

The post Just an Eagle appeared first on Nebraskaland Magazine. 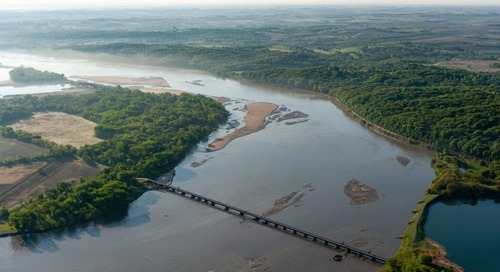 I’ve paddled many of the state’s rivers, mostly during the past 20 years creating stories on the state’s wa... 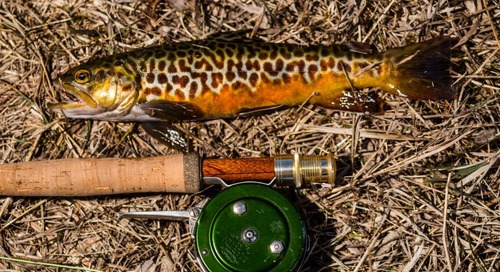 Step away from ordinary equipment to fly-fish Nebraska’s trout streams. Let’s get this out of the way early...