Home » NEBRASKAland Magazine » The Most Secretive of Skunks
× Share this Article

The Most Secretive of Skunks

As soon as he saw the roadkill on the side of Highway 83 in the Valentine National Wildlife Refuge, Melvin Nenneman was pretty sure he was looking at something special.

Nenneman, a wildlife biologist with the refuge, made a U-turn so he could investigate. What he found was indeed special.

It was an Eastern spotted skunk – a small, rare skunk with spots instead of stripes down its back that in Nebraska is considered a Tier 2 species of greatest conservation need. It didn’t appear the skunk had been there for long – it was curled up and looked like it was sleeping.

“I’ve worked here for 15 years and I’d never seen one of these animals alive or dead,” Nenneman said.

Few people have. Since 2009 there have been only four confirmed sightings of spotted skunks in Nebraska, all in the northern part of the state, said Mike Fritz, a biologist for the Nebraska Game and Parks Commission.

Several other unconfirmed reports trickle in each year, too, including two in southeastern Nebraska this past spring. Still, fewer Nebraskans see spotted skunks each year than they do endangered whooping cranes, Fritz said. The Decline of the Spotted Skunk

Biologists surmise that populations of spotted skunks – like many other species – declined when white settlers moved into the Great Plains and began hunting and trapping them. Their numbers rebounded some in the 1930s and 1940s when the landscape was dotted with small farmsteads that provided good habitat for the species.

Spotted skunks, which eat grubs, grasshoppers and small mammals, often lived under outbuildings where mice were also present; when Fritz was growing up near Falls City, Nebraska, he remembers his father mentioning a spotted skunk living under his granary.

In the 1950s and 1960s, spotted skunks again began to decline, but biologists aren’t exactly sure why, Fritz said. They suspect it may have had something to do with changing agricultural practices and vanishing habitat.

“It’s just a mystery,” said Kristal Stoner, wildlife diversity manager for the Game and Parks Commission. “We don’t really know why they started to decline, but they did.”

But how much, no one is quite sure. Spotted skunks have small home ranges, they are extremely secretive and they’re rarely active during the daylight hours, which makes them difficult to study, said Fritz. Shedding Light on a Secretive Species

Nenneman’s skunk could shed some light on this mysterious species. After his discovery, word of the roadkill skunk on the Valentine Refuge spread among skunk researchers. Robert C. Dowler, a professor of biology at Angelo State University in San Angelo, Texas, eventually contacted Nenneman to ask if he could use DNA samples from the skunk for a research project. The spotted skunk’s carcass made its way from the refuge to the Game and Parks Commission headquarters in Lincoln, and eventually to San Angelo.

The Public’s Help is Needed

There is still much more to learn about the spotted skunk, and Dowler, Fritz and other biologists are calling on the public to help.

Anyone who believes they see a spotted skunk in Nebraska should call Fritz at 402-471-5419.

The fact that spotted skunks are found from time to time despite their secretive nature suggest they may not be quite as uncommon as previously thought. “These records indicate we still may have some very small populations out there,” Fritz said. “It’s just that no one is out there to see them.”

Fritz, Nenneman and other biologists, for their part, will continue to keep an eye out for out-of-the-ordinary roadkill. “As a biologist, I’m always looking at dead stuff on the road,” Nenneman said. “Keep your eyes peeled. You never know what you’ll see.”■ Cara currently works at the Nebraska Game and Parks Commission and has written articles for NEBRASKAland Magazine, the Lincoln Journal Star among others.

The post The Most Secretive of Skunks appeared first on NEBRASKALand Magazine.

LINCOLN, Neb. – Keep your kids active and having fun during winter break at the Arctic Archery Day Camp in ... 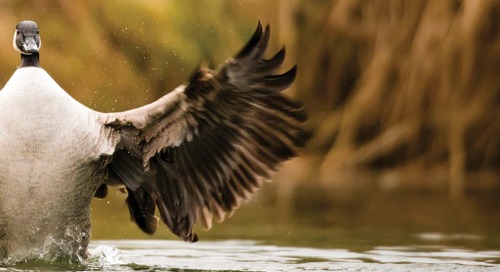 The Worth of a Wild Goose

Canada Goose Hunting in Nebraska and “the Leopold tingle” In his classic 1949 book A Sand County Almanac, A...