Home » NEBRASKAland Magazine » Swing and a Miss!
× Share this Article

The big college baseball tournament in Omaha just finished up.  Like Major League Baseball, there are a darned lot of strike-outs in the game nowadays. . . .

Likewise, if you have spent any amount of time on the water, you have at least a story or three about “the one that got away”.  Probably got a bunch more stories about fish you missed on the hook set.  You know you do, and you will appreciate this video:

Had a big rainbow eat a ‘hopper pattern once while on a float trip with my nephew and son.  I had made a perfect cast into a very fishy-looking pocket, and sure enough a big ‘bow rose right up to slurp it in.  I set the hook, and somehow missed.  While I went right into a back-cast, that big rainbow kept turning its head, slurping on the surface like a glutton.  The “hopper” she had tried to eat was not there, but she was sure it was.  I put the fly right back on her and she ate it again.  The second time I got a good hook set and the fight was on!  I played that fish out into the main current and it was only a matter of time until we put her in the net when a big clump of aquatic vegetation came drifting by.  Well, you know where that big rainbow went, and you know how this sad story ends.  I will never forget the sight of that fish slurping on the surface just waiting for me to flop my fly right back on her.

Muskies will stinkin’ drive you crazy, literally.  If you have ever seen me slobbering, blubbering, sitting down crying, mumbling under my breath, it was because of a muskie.  Everyone who has ever been serious about catching ‘skies knows that there will be slumps when we will go for hours, days, maybe even weeks or months between fish.  Been there, done that.  Got one of those streaks going right now.

Earlier this year, for just a moment, I thought I had it busted.  I sat down and spent twenty minutes sharpening hooks, went back to casting and not three casts later felt a fish eat my bait.  As I learned from my Gramps Roth, I jerked his eye-teeth out, got a great hook-set, and then watched as I am guessing a 40-some inch muskie came wallowing to the surface.  It opened its mouth, shook its head back and forth, and I watched my bait pull out.  I swear, it all happened in slow-motion.

Then, I sat down and just sat there mumbling for several minutes.  I had just sharpened the hooks!  I think the fish ate the bait from directly behind, never did turn one way or the other, so I could grind the hooks in.  After the hook-set, it just came up, facing me, opened its mouth, and let go of my bait.

If you look close, you can still see the water swirling where that fish was: I am always trying to learn from the fish I lost, always trying to understand what I could have done better, but I learned a long time ago there is only one thing you can do after you miss or lose a fish. . . . Get your line back in the water!

The post Swing and a Miss! appeared first on Nebraskaland Magazine. 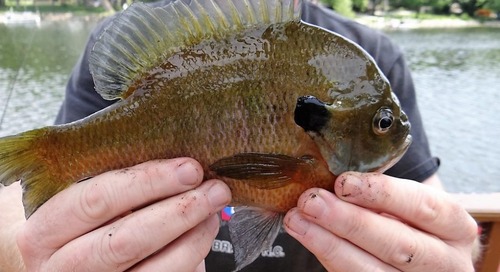