I got out of the office one day last week to assist with some fish stockings.  Here was the news release from a couple weeks ago:

Hybrid bluegill to be stocked in urban lakes

LINCOLN, Neb. – Nebraska families fishing urban ponds and lakes will have additional angling opportunities as the Nebraska Game and Parks Commission is stocking hybrid bluegill in 11 bodies of water.

These hybrid bluegill are hardy, grow quickly and are great table fare. They are easy to fish for, too; just bait a long-shanked hook with a night crawler and add a little weight and a small bobber.

“May is a great month to be fishing in Nebraska, especially for panfish like these,” said Dean Rosenthal, Game and Parks’ fisheries administrator. “Feeling one of these fish at the end of your line is a great thrill for any kid, and they are fun to catch for everyone in the family.”

Visit OutdoorNebraska.org to purchase a fishing permit or learn more about fishing in Nebraska.

Now let me fill in the blanks:

Our Nebraska state fish hatcheries produced some bluegill X green sunfish hybrids over the last year.  There is nothing special about hybrid sunfish, green sunfish X bluegill hybrids occur in the wild.  These fish were produced in our hatcheries because they are a fast-growing, relatively aggressive fish that relatively easily can be raised to a catchable-size in a hatchery.  We are not going into full-scale production of hybrid sunfish, but we wanted to produce these fish to stock into a few parks and urban waters.  Our goal was simply to provide a few more larger sunfish for anglers, especially young anglers, to catch at those heavily-used waters.

Here is what those fish looked like at the hatchery:

Early last Thursday morning three stocking trucks loaded hybrid sunfish at North Platte and Valentine state fish hatcheries, and then made the trip east.  I met one of those trucks in Nebraska City and helped stock those fish on the “southern run”. Then we buzzed down the road to Auburn and stocked another 1,300 at the Rotary Club or fairgrounds lake.  City parks personnel met us there and we appreciated their help. Quite a few kids fishing when we got there! Then we wove our way down to Falls City and found their park lake, Stanton Lake.  Happened to run into city parks personnel there too and he was helpful in telling us where to drive the truck so we could “pull the plug” and run the fish through the tube and into the pond. There were some folks fishing there too, and a couple were right over to get after the 300 hybrids we just stocked.

Then it was back towards Humboldt where we dropped off another 300 hybrid sunfish, and finally the last 300 found a home in the Pawnee City Pond. Derrek from our North Platte State Fish Hatchery had the Omaha metro “run” and encountered by far, the cutest helper.

As you can see there were some folks fishing Towl Park when the stocking truck showed up there:

And I am told they were soon catching hybrid sunfish, even on a fly-rod!

No, I do not expect that there are going to be lots of hybrid sunfish to be caught from the waters where those fish were stocked over the coming months.  Those fish are going to be readily caught and when they are harvested they are going to be gone.  Likewise, I do not expect that there are going to be monstrous hybrid sunfish caught from the heavily-fished urban waters in which they were stocked.  However, if those fish make the day of a bunch of kids, then these stockings were a complete success and we likely got a bunch more beginners hooked on fishing (pun intended).  No, we will not be able to stock fish like those hybrids in everyone’s favorite body of water nor in everyone’s local city pond, but I am confident they will be appreciated, and accomplish what we intended, where we were able to stock them.

Lastly let me say this:  Last Thursday I was glad to get out of the office a few hours and help stock those hybrid sunfish.  The work was easy for me.  The guys driving the stocking trucks put in a long day and traveled hundreds of miles.  I was privileged to meet up with and show around Clint Burrell from our Rock Creek State Fish Hatchery.  Clint had been in Valentine all week lending a hand because we have been working a man down there recently.  So, Clint had been away from home all week, loaded fish at Valentine by 4:30 a.m. Thursday morning and then drove those fish all the way to the far southeast corner of Nebraska.  We finished up at Pawnee City at 5:30 Thursday evening, and Clint was tired and ready to head for a motel room in Beatrice before driving all the way back across the state to get home on Friday.  I have said before that all of our Fisheries staff are busy, very busy in the spring, every spring, and last week was a great example of that!  Thank you guys, all of you, for what you do! 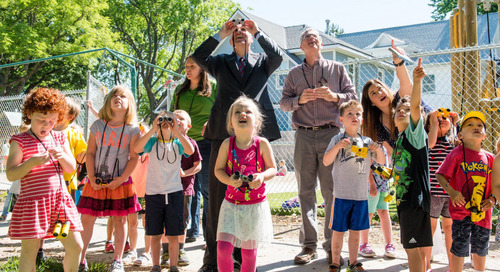