I again have a few state record applications to clear off my desk; this is the time of year when they are mostly spear-fishing and bow-fishing records.  Let’s go underwater to start:

Three applications for state record fish taken by underwater spearfishing are in the stack.  All of those fish were taken in July, let me start with the first taken on July 6. . . .

Dylan Trauernicht of Gering was doing some diving on a private lake in Scottsbluff County when he speared a bluegill that will be recognized as a new state record.  Dylan’s fish weighed 1 pound even, was 10 1/2 inches long, and beat the old state record by exactly 1 ounce. The other two underwater spearfishing records I have were both taken by the same diver, Ryan Reynolds of Lexington.  On July 23 Ryan was at Lake McConaughy and expertly speared a 1 ounce alewife.  That is right, I said 1, O-N-E, ounce, a 5 1/2-inch fish.  As you can see that was a small target! Ryan has set the bar for the underwater spearfishing state record alewife and it can only go up from there!

If you think that Ryan can only hit the smallest of targets, you would be wrong.  On July 29 Ryan was in the water at Elwood Reservoir and there he speared a 18 pound 12 ounce, 42-inch muskellunge, the first underwater spearfishing record we have had for that species. The other two state records I have to tell you about were taken by bow-fishing.  Again, in the order in which they came across my desk, the first was taken on July 23 by Lincoln McClure from Manhattan, Kansas.  Lincoln was enjoying some time at Lake McConaughy when he arrowed a 2 pound 14 ounce, 21-inch shorthead redhorse sucker. Lincoln’s redhorse was a dandy as it more than doubled the old bowfishing state record for that species, a 1 pound 2 ounce fish taken just last year.

The last fish I will tell you about was the largest.  On August 6, Connor Marcoe from Palmyra found a 55 pound, 45-inch flathead catfish in the Little Nemaha River. Connor hauled his big flathead into my office to complete the species verification he needed to have his record certified.  Yes, it was indeed a flathead catfish, did not take me six and a half years of college to know that.  Ha.  Anyway, that meant I got to see the big fish, and enjoyed sitting and talking with Connor for a few minutes.  I can tell you he spends a lot of time bow-fishing around the state and knows his stuff.  There was a lot more than a little “luck” involved in his taking of that state record.

I am still waiting on some witness signatures to make Connor’s fish the official, new, bowfishing state record for flathead catfish.  At 55 pounds it will be exactly 2 1/2 pounds bigger than the previous bowfishing record flattie taken back in 2006.

Connor’s big flathead has attracted some media attention as there has already been a story in the Omaha World Herald, Palmyra Fisherman, Connor Marcoe Breaks State Catfish Record.

For the rest of you, you never know what you might catch, so it never hurts to take a few minutes to brush up on the state record rules in any copy of the Fishing Guide.  I typically do not see a lot of state record applications in the fall, but that is mostly because folks shift their focus from fishing to hunting and other fall activities.  BIG MISTAKE!  In my opinion fall is one of the best times of the year to catch big fish, trophy fish, the fattest, heaviest, healthiest fish of the year.  Who knows, one of them might just be a new state record! 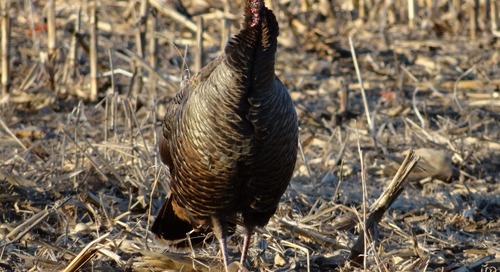 25 Reasons to Hunt Turkeys in the Fall

I know, I know. There is nothing like spring wild turkey hunting in Nebraska, and the fall hunting season f...