So far all of the applications have been for fish caught by rod & reel.  Let me tell you about them in the order in which they came in:

Since then we have raised Tiger Trout in Nebraska State Fish Hatcheries and have been stocking some of those fish around the state.  When we started doing that, I knew we would see the Tiger Trout record get pushed larger and larger.  What I have now is the beginning of that race.

Geoffrey Lucas from Omaha was the first to set a new Tiger Trout record on March 19 with a fish he caught from Two Rivers Trout Lake. Geoffrey’s fish weighed in at exactly 1 pound and was 14 3/8 inches long.  The bait used to catch that fish was top secret as that was left blank on the application form.

That fish stood as a new rod & reel state record Tiger Trout for eight days until Cooper Shaw of Parks caught a bigger one from Rock Creek Lake. The Tiger that Cooper caught weighted 1 pound 3 ounces and was 15 1/8 inches long.  Cooper caught his record fish on a Dardevle spoon.

I thought I might be seeing Tiger Trout record applications cross my desk weekly for awhile, but that has not been the case.  However, in no way do I believe our rod & reel Tiger Trout record is going to stand at 1 pound 3 ounces.  Tiger Trout are capable of growing much larger, world records up to double digits have been recorded.  I do not know the ultimate size Tiger Trout we might see in Nebraska waters, but that gives you an idea of their growth potential.  I am betting Lake Ogallala will eventually produce our largest Tiger Trout, and I am betting those fish will be a lot more than a pound.  Stay tuned. When I give state record updates I also like to tell about some of the “near misses”.  I do not have any of those, officially, this time, but this spring I have noticed a lot of pictures of exceptional fish caught from Nebraska waters.  Fish that I believe were very close to record size.  I want to share some of those photos with you, photos that I found mostly on various social media.  I am not saying that these fish would have been new state records had they been certified, but I AM SAYING that they certainly “were in the ballpark”, and they were exceptional fish!

In at least some cases the anglers that caught these fish cared more about releasing them than potentially having them certified as state records.  I am not going to mention any of the anglers by name, but I do want to brag on their catches and especially on their releases!  WELL DONE!!!!!

And a couple of Missouri River Blue Catfish have caught my eye: The Blue Cats are particularly interesting because, well, they are absolutely H-U-G-E.  Our current rod & reel state record Blue Catfish stands at 100 pounds 8 ounces and 59 inches.  It was taken by snagging in the Missouri River back in 1970, back when it was still legal to snag those fish from the river.  I would love to see that snagging record beaten by a bigger Blue that actually took a bait!  I have seen pictures and heard tales of several Missouri River Blue Cats that might have been big enough to accomplish that, but if the anglers who caught those potential record fish would rather release them immediately I am all for it!  But, that is not going to stop me from showing pictures of some ginormous, record-class, Nebraska Blue Catfish!

I love fishing.  You put that line in the water and you don’t know what’s on the other end.  Your imagination is under there.–Robert Altman, film director (1925-2006)

I often say the only thing I know for sure about fishing is that you cannot catch anything sitting at home on the couch.  Put a line in the water, and you never know–the next bite could be a trophy, a record.  It would not hurt to be familiar with the state record rules, because, there is a chance: You can find an application form in every copy of the Fishing Guide. 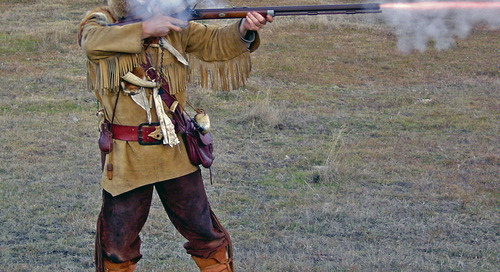 Give Traditional Muzzleloaders a Try

For a long time I’ve thought that somehow I ended up in the wrong century – I’ve always felt just a bit unc...