Give Traditional Muzzleloaders a Try For a long time I’ve thought that somehow I ended up in the wrong century – I’ve always felt just a bit uncomfortable in today’s ever expanding culture of high-tech gadgetry.  I’ve been interested in history, especially American history, for about as long as I can remember, and one of the era’s that most intrigues me is that of the American frontier and the days of the “mountain men.”  Their tenacity and self-sufficiency is awe inspiring.  Many of them survived for years in the wild with little more than what they could carry, and what they could hunt, with the firearm of their day – a muzzleloader.  Now of course I’m not talking about today’s in-line muzzleloaders, about which I am the first to admit I have little experience, so I’ll stick with what I know about more primitive flint and caplock guns, and I’ll just give you the proverbial “tip of the iceberg” to hopefully “ignite” some interest.  The muzzleloaders I’m referring to, which are often called “traditional” muzzleloaders, (also known as “smoke poles” or “boom sticks”), are pretty simple in their mechanics compared to today’s high powered firearms.  They were the tools of real life men like Davy Crockett, Daniel Boone and Jim Bridger.  Without them, and without proficiency with them, survival was questionable at best.

As I noted, the basic operation of a muzzleloader is pretty simple.  It consists of pouring powder (typically black powder or a black powder substitute like Pyrodex) into the gun barrel, followed by wadding (a cloth patch) and a projectile (usually a lead ball), tamped down with a rod.  Powder, wadding and a projectile – the same components as a shotgun slug, but in the case of a muzzleloader the components are not encased in a plastic jacket.  The ignition system of a traditional muzzleloader will either be a flintlock or a caplock.  We could say a flintlock is the more primitive technology as it was popular from the time of the Revolutionary War through the early 1800’s.  Flintlocks aren’t always reliable, especially in damp or wet weather.  The percussion cap was introduced around 1820, greatly reducing the chance of a misfire. With the flintlock, the flint is held in place on the hammer by a small clap.  Below the hammer is a frizzen (a swinging metal plate) and a pan into which a small amount of powder is poured.   When the trigger is pulled, the hammer releases, forcing the flint to strike the steel frizzen, causing a flint on steel spark that ignites the powder in the pan.  The ignited powder shoots a tiny flame into the barrel through a small hole or port, igniting the powder inside.  When the powder inside of the barrel explodes it causes the ball that had been tamped onto it to shoot out the barrel. Caplock ignitions work under the same basic concept as flintlocks, funneling flame through a small hole and into the barrel of the gun to ignite the powder.  Caps are generally made from copper or brass and contain a tiny amount of a shock-sensitive explosive, such as mercury or nitroglycerine.  The cap is placed on a nipple directly under the gun’s hammer.  When the trigger is pulled and the hammer falls, the cap shoots a tiny spark or flame through the nipple and into the port in the barrel, igniting the powder inside and shooting the ball out the barrel.

Regardless of the ignition type, muzzleloaders obviously require a few more steps than just inserting a cartridge into the chamber of a high power rifle.  It may seem complicated and frustrating, so it’s not for everyone.

The actual firing process goes something like this…aim…hold steady…”click”…pause…BOOM!…white smoke.  Ignition in traditional muzzleloaders is not instantaneous.  A flintlock shooter needs to hold steady for a second or more while the explosion develops.  Errors are common.  Although the ignition in a caplock muzzleloader is more rapid than in a flint lock, there’s still slight delay. So, let’s review…muzzleloaders can be cumbersome to load, they’re subject to misfire depending on weather conditions, the powder must be measured each time the gun is loaded so loads may vary, and becoming an accurate shot takes a lot of time, patience and practice.  So why would anyone want to hunt with a traditional muzzleloader?!  Because they’re a blast! Literally!  Or as I like to say, “Big Fun!”  My hunting hero, my dad, was a big traditional muzzleloader hunter, and even built several of them himself.  He was so into it, like many traditional muzzleloader enthusiasts, he fashioned much of his own muzzleloader hunting gear and outfitted himself in mountain man attire, frequently attending an historical reenactment or a rendezvous to compete in muzzleloader shooting contests.

The first time I had the opportunity to shoot one of my dad’s muzzleloaders, I was hooked!  Muzzleloader hunting offers several advantages for me personally…it adds another tool to my collection of hunting gear and allows me to extend my time in the woods each year.  Although I promote hunting every chance I get, I do enjoy the solitude hunting often provides, and special muzzleloader seasons are usually outside of the more popular rifle seasons, which means fewer folks in the field during those times.  It’s also a personal challenge.  It takes more patience, skill and a steadier hand than rifle hunting, and requires a more close-up encounter with the intended game.  Although primitive scopes existed in the early 1800’s they weren’t the norm so for authenticity we’re talking about good old-fashioned iron sights alone.  And although I have harvested elk at a distance slightly more than 100 yards, traditional muzzleloaders are generally accurate up to no more than 100 yards.  Most will have a “sweet spot” where they shoot very accurately to a certain distance with a certain load.  Any farther than 100 yards and you’ll begin to lose velocity and subsequently accuracy.  Yes, a heavier powder load may indeed generate more muzzle velocity and knockdown power, but a bigger boom does not equate to a better shot.  It’s just how they work.   A load of 120 grains of powder is the maximum for most muzzleloaders, and 90 to 100 grains is plenty to take down a big game critter without knocking you down in the process.  After all, the point is to be a more skillful hunter and stalk within closer range.  Lastly, traditional muzzleloaders offer the mystique of hunting like Jeremiah Johnson, allowing me to enjoy a part of (be a part of) history and maintain a connection to my beloved dad through one of his passions. There’s so much more muzzleloader stuff to talk about, but since this is a blog and not a book, I need to cut it short.  To sum things up, if you aren’t a muzzleloader hunter (yet) and you’re looking for something new and maybe a little more of a challenge, I highly recommend doing some research on muzzleloaders and give ‘em a “shot,” (yes, pun intended).  You’ll of course need to become familiar with a few different safety precautions associated with muzzleloaders before you begin, mostly associated with the loading process, but once you’ve got those down you’re on your way to a great new type of hunting.   And just in case you’re wondering, dressing up like Grizzly Adams is not a requirement, although it does add to the fun.

The post Give Traditional Muzzleloaders a Try appeared first on NEBRASKALand Magazine. 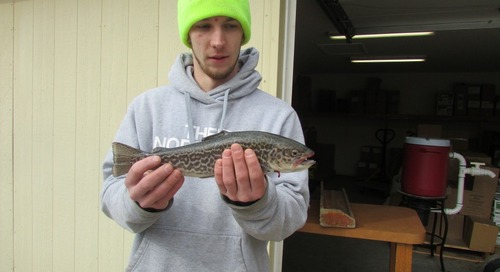 I have a few state record applications laying on my desk; time for the first state record update of 2016! S... 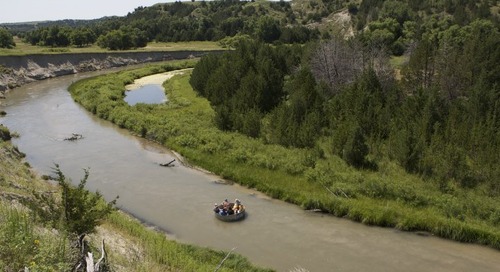 Want something fun and relaxing to do with your family this spring or summer? I have an idea for you. How a...