It has been quite a while since I gave an update on Nebraska state record fish.  The main reason for that is there has not been much activity.  There has been some however, so let me tell you about it.

The first was caught by rod & reel back in April.  I told you it had been a while.  The fish was a shorthead redhorse, a native species of sucker.  Adam Pavelka from Verdigre caught the fish.  Adam caught the redhorse on a jig and worm from the Missouri River in Knox County.  It weighed 3 pounds 8 ounces, and was 20 1/8 inches long. Back in May, Isaac Howser from Dodge, Nebraska was bowfishing at Fremont Lakes SRA when he arrowed a 63-pound bigmouth buffalo.  Isaac’s fish was 43 inches long.

We have had some big buffalo taken by bowfishers over the years.  The previous record was 6 pounds lighter, and was taken at Johnson Reservoir five years ago.

Adam and Isaac, your state record certificates will be coming in the mail.  Sorry to take so long.

Down a Rabbit Hole

I had one other state record application cross my desk.  It was for another fish taken by archery, a gar.  By rule, state record fish have to be examined by a Nebraska fisheries biologist.  The primary reason for that is to verify the identity of the fish.  Initial field identification of the gar in question was shortnose gar, a very, VERY big shortnose gar.  A shortnose gar that was approaching three times larger than any shortnose gar ever recorded.

I went to school with the lead author of The fishes of Nebraska.  When I have questions about fish identification, he is my “go to” guy.  I sent him photos and descriptions of this fish.  Almost immediately his response was longnose gar.  His expert opinion was enough for me.

But, that was not the end of it. . . . What about DNA?  Coincidentally, there was a similar fish recently arrowed by another Nebraska bowfisher down in Missouri.  The Missouri gar had had DNA analysis and the results were, well, cloudy.  My inquiry then set off a debate among several Missouri fish biologists about gar genetics.  Come to find out, there is more work that needs to be done on “mapping” gar genetics.  Right now, the DNA standards for gar have not been established and well, you cannot determine what DNA you are looking at unless you know what it is supposed to look like.

Oh, and if it is too big to be true, it probably ain’t, even if it might be a record. 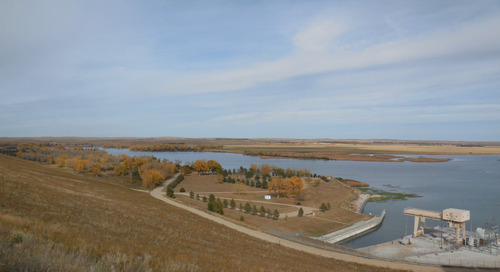 I know these news releases have been circulating for a few days.  I also know that it is fall and fishing a...