It has been a few months since I have given a state record update and there are a few applications sitting on my desk. . . .

Most of the activity in the state record program over the past few months has been in the bowfishing section, but I have one fish caught on rod & reel that I need to tell you about.

We have had a run on state record Yellow Bullheads in recent years, and now I believe that bar may have been raised to the point where this one might stand for awhile.  On June 4, Dylan Turner from Lincoln was fishing a private pond in Otoe County when he caught a Yellow Bullhead that was a whopping 2 pounds 4 ounces and 14 1/4 inches long! Dylan tossed out some chicken liver to catch that fish.

Again let me say that Black Bullheads are by far the most common Bullheads in Nebraska.  Black Bullheads ain’t black and will be mostly yellow, especially on the belly.  So, even though they might be called “yellow bellies”, most Bullheads caught by Nebraska anglers will in fact be Black Bullheads.  The difference between a Black Bullhead and a Yellow Bullhead ain’t much and comes down to barbs on the pectoral spine and number of anal fin rays.  So when we have a potential state record Yellow Bullhead, we look really close to make sure we have the right identification.  Tony Korth, a pointy-headed co-biologist at our Ak-Sar-Ben Aquarium, looked that fish over very carefully and concluded it was in fact a Yellow Bullhead.  From what Tony told me, I agreed, and Dylan’s fish will be recognized as our new rod & reel state record.  I am betting it will be awhile before someone catches a bona fide Yellow Bullhead that is larger than that.

As is common with most of the state record applications I receive this time of year, the rest I have to share with you were taken by archery.  Let me go in the order in which they crossed my desk:

Back in June, Jason Nowaczyk of Elkhorn was doing some bowfishing out at Harlan County Reservoir when he stuck a big Shortnose Gar.  Officially that fish will be recognized as a new archery record at 9 pounds 14 ounces and a length of 41 3/8 inches. You can see certifying state record fish is very serious business!  Jason had not only a Conservation Officer as a witness, but also a County Sheriff!

Gar are a species of fish that are commonly taken by archers–laying around basking just under the surface offers an excellent target of opportunity for a bowfisher.  We have had a lot of Shortnose Gar certified as bowfishing state records over the years and this fish pushed the record up just a half-pound over the previous record taken in 2013.  Shortnose Gar taken from Nebraska waters have been some of the largest on record anywhere; who knows, maybe that Shortnose Gar bowfishing record can push over 10 pounds?!

Marlyn Wiebelhaus’ name is scattered throughout our bowfishing state records.  Obviously, Marlyn likes to bowfish and you can guess what he was doing on his 4th of July holiday.  On that day he stuck a 1 pound 2 ounce Shorthead Redhorse, a species of Sucker.  Marlyn’s fish was 14 1/8 inches long. Marlyn’s Redhorse was taken from a stream in Cedar County, a stream I am betting flowed into the Missouri River.

You can see in the photo why the Redhorse Suckers have their name–margins of fins are usually red.  There are several species of Redhorse Suckers, but only the Shorthead Redhorse is found in Nebraska waters.

Game fish can legally be taken by archery from Nebraska waters July 1-Dec. 31.  Bowfishers must be aware that all length limits and bag limits apply, so they have to be sure of their shot, that a game fish for which a length limit applies are legal-sized, before an arrow is released.  Muskellunge certainly are recognized as “the king of freshwater game fish” and in Nebraska all Muskies must exceed 40 inches in length to be legally harvested.  When Trevor Kraus of Taylor spotted a Muskie at Calamus Reservoir on July 5th, he did not have to worry about the 40-inch minimum length limit, the fish he found was way more than that.  It weighed 31 pounds 11 ounces and was 45 3/4 inches long. Now, let me say that I completely realize that hardcore Muskie anglers do everything they can to release every Muskie they catch, especially the big ones.  I have caught & released Nebraska Muskies up to 50 inches myself.  Obviously, a Muskie taken by archery is not going to swim away, is not a fish that is going to be released.  So, before the negativity starts, and I have been around long enough to know there will be some, just keep in mind that this Muskie was legally taken, and as long as they exceed 40 inches, and are taken during the months of July through December Nebraska bowfishers have every right to do so.  Also keep in mind that this is only the second Muskellunge we have ever had registered as a bowfishing state record.  Archers are NOT a threat to any Muskie population anywhere in Nebraska.

Sorry I mentioned it, but hopefully that will head off some backlash.  Congratulations, Trevor.

The last one I want to tell you about is another game fish.  Justin Powell of Alliance was up on the Wood Reserve in Sioux County on July 17 and arrowed a 5 ounce, 10 1/4 inch Tiger Trout. This is the first Tiger Trout we have had certified as an archery state record.  We will see how large Tiger Trout can get in Nebraska in the coming years, and we will see how many more are shot with pink arrows.

Got a couple of interesting stories to tell you about fish that nearly missed state record status.  One was another Yellow Bullhead that was smaller than the fish that had been certified as a new state record in May (State Record Update, May 2016).  That gentleman had no way of knowing his fish was not big enough to beat the Yellow Bullhead that had been caught only thirty-some days earlier.

Another one is one of most unusual state record fish stories I have heard, and I have heard some whoppers (I once received the head, only the head, of a Largemouth Bass that the angler believed would have been big enough to be a new state record except he gave it to the neighbor lady to eat.  The head was the only thing he could salvage a day later.  I had that head in a freezer for years.)  This story also involved fish that were going  to be eaten when someone decided, “Hey, wait a minute, those fish might be big enough to be state records”.

In this case the fish were Tiger Trout.  We recently have stocked more Tiger Trout, a Brown Trout X Brook Trout hybrid, in a number of waters throughout the state.  I expect our state records for Tiger Trout will continue to push larger in the coming years as we see what the growth potential of those fish will be in Nebraska waters.  There were a pair of those fish caught this summer that were going to make a fine meal of baked Trout when it was decided those fish might have been large enough to beat the existing rod & reel record of 1 pound 3 ounces.  So, those fish were taken to our district office in North Platte, in the baking dish, heads already removed, with butter, lemon and seasoning already applied.

We had to reject those Tiger Trout as potential state records because the wrong seasoning was used.  Everyone knows you use fresh rosemary on baked Trout, not sage.

Actually, the state record rules state that the fish must be preserved flat until identification can be made by a pointy-headed fisheries biologist.  Cutting the heads off and removing entrails ain’t exactly “preservation”.

The last close call to tell you about was a monstrous Common Carp caught by rod & reel from an interstate lake.  Most interstate lakes unless they have flooded at some time have few if any Common Carp present.  But, in those that only have a handful of Carp, those few Carp can be monsters.  This fish weighed 32 pounds 11 ounces and missed being a new state record by just over a pound. Congratulations to all the bowfishers and angler mentioned in this blog post!  Your state record certificates will be coming in the mail!

Commission to Consider Some Fee Increases at Meeting in Broken Bow

LINCOLN – The Nebraska Game and Parks Commission will consider proposed fee increases to some permits and s... 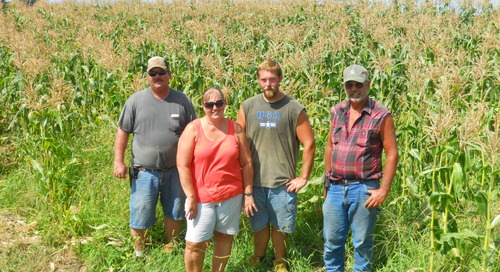 Can I get permission to hunt on your land?