Got another report from Nebraska’s spring turkey “woods”.  Once again this year I was privileged to help with a turkey hunting camp at Maranatha Bible Camp.  The camp was hosted by Maranatha and SkyQuest Outdoor Ministries.  We had folks from several states and in spite of lousy weather took a number of birds from private land in the camp vicinity.

I always say “weather trumps everything” and in Nebraska I am reminded of that often.  The weather was not good for the duration of the camp, it was cold, cloudy, with at least some wind, or worse, the whole time.  We hunted one morning in pouring rain changing to snow, and honestly in those conditions did not have much of a chance to take a bird.  The guy I hunted with, Mike, and I saw nary a turkey that first morning.  Oh, and then when camp was over I drove through a blizzard to get home.

I like to stay mobile while chasing spring gobblers.  Do not get me wrong, I absolutely believe that many times the best thing a spring turkey hunter can do is keep his/her butt in place and wait for the birds.  In my opinion, a quality butt-pad is one of THE most important pieces of hunting gear .  But, I also know when the toms are gobbling, sometimes you gotta move.  So, I do not spend a lot of time hunting from any type of blind.  On the other hand, I will tell you that you cannot kill anything sitting at home on the couch, so when the weather is lousy a pop-up blind is an excellent way to at least be in the field.  The one morning we spent in the rain and snow we would have been soaked in less than an hour if we were not sitting in a pop-up blind.  At least we were out there watching the slush accumulate on our turkey decoys.

Once the rain stopped, we were a lot more optimistic and eventually did put a Tom to roost the first night.  We moved the blind, and were confident we would at least see that Tom the next morning.  He never showed, never even gobbled on the roost.  If I had a dime for every time they went the other way. . . . A couple hours after fly-down, we did have a bird gobble one time near our set-up, but again he stayed out of sight up on the ridge above us–following hens I am sure.

We were in the blind by 4:00 that evening, settled in not expecting a lot of activity until later.  I did hear one gobble to the northwest of us, but knew it was going to be a good time to take a nap (another good reason to hunt from a blind).  After a couple of hours (no, I was not asleep that whole time), Mike nudged me and the first thing I saw upon opening my eyes was a full-strut Tom a couple hundred yards away.  (Yes, Mike subsequently gave me a bad time about waking me to call his turkey, he told everyone the story in that way.)

Through my binoculars I studied the bird and concluded he was alone, strutting, looking for a hen or three.  So, I called a bit, not a lot, not loudly, just a few quiet yelps.  He gobbled and I knew we had his attention.  We watched, mostly the Tom strutted, but he had heard my calling and slowly, but surely, he was working our way.  I just let him come.

At one point, as he was strutting through some native grass, I softly purred and yelped one more time just to make sure he had that “hen” pin-pointed.  He did.

He turned, kept walking through the tall grass towards us.  Mike wanted to know if the bird was close enough, but I told him to just wait, he was going to get a lot closer.  We were sitting on a fence between the grass and a hay field, and I knew the bird was going to duck under the fence into the hay field where we were sitting.  Then Mike would have a clear, easy shot.

Love it when a plan comes together! We took some pictures and crawled back into the blind–there were still a couple hours left to hunt.  Most of that time was uneventful until it got closer to sundown, and then there were deer everywhere.  Finally, we spotted some more turkeys, 5 or so hens and a couple of big, strutting Toms, and again they were working our way.  It looked like Mike was going to get a chance to fill his second permit.

The hens kept feeding and the Toms kept strutting.  I was sure they were going to walk by right in front of us, but at the last moment the hens veered off and instead of walking out onto the hay field angled into the brush.  At first the Toms were lost, did not know where the hens had gone, standing with their heads in the air.  I called to them, and they looked, but they were not that far behind the hens and followed them right into the brush as well.  A few minutes later a gobble from a hundred or so yards past us let us know they were all headed for their roost trees.

While our hearts were pounding, anticipating that Mike might get another bird, there came a shot, a single shot from the other blind.  One shot is always a good sign and we were optimistic that Ellie had punched her tag!  Later we discovered both Ellie and her dad had doubled-up on two big toms that left an on-going rumble with a bunch of jakes and worked their way.  They each shot simultaneously on the count of three!

Given the conditions it was not an easy hunt, but as you can see we had success.  Spring Toms can be frustrating and require perseverance, but given some time and effort it will happen.  When it does, it is unforgettable.  I can’t get enough of it.

My daughter is home from school now, she has a tag, but I do not know how hard she wants to hunt.  We will see, stay tuned; I am pretty sure I hear another turkey gobbling, gotta go. . . .

LINCOLN, Neb. – A Teddy Roosevelt impersonator appearing May 13 at the Fort Kearny Outdoor Expo is funded b... 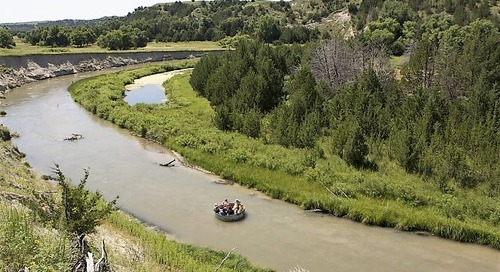 Want something fun, relaxing and unique to do with your family or friends this spring or summer? Well, well...