Setting sights on the walleye

The walleye may be Nebraska’s most popular, albeit often hard-to-catch, game fish. It is known for not only having great-tasting fillets, but also for growing big and providing anglers a fishing challenge.

Despite its reputation for being hard to catch, at certain times of the year walleyes can be taken by both boat and bank anglers with average skills.

Joe Rydell, a fisheries biologist for the Nebraska Game and Parks Commission’s northwest district, said we are in the midst of one time to target walleyes. In April, Nebraska’s walleyes are spawning, or getting ready to, so the population becomes concentrated in shallow water.

If you do not have success now, however, try it a little later.

“The best month to catch them in is probably going to be toward the end of May and into June, when these fish are coming off of spawning. They’ve had ample time to rest and, at that time of year, they’re really concentrating on feeding,” Rydell said.

Especially for anglers seeking big walleyes, fall also can be good fishing for the species.

As with most fish and game, knowing what those toothy walleyes want lends clues to when and where you will find them.

“They’re a predator fish. So, first of all, before you figure out what kind of habitat you’re going to search, you’ve got to figure out what they’re going to be eating in that water body,” Rydell said. “They’ll be hanging around that food source. In some lakes, that may entail a good rock bottom, or rock structures. In other lakes that are more vegetated, they may be along the weed line. In lakes that have a combination of both, it could be some woody debris or rock structures that are intermixed among those weed beds. At certain times of the year, even though they’re big fish, they may be concentrating on a bug hatch.”

“Casting jigs and crankbaits, still-fishing or drifting live bait rigs, and trolling crankbaits or live-bait rigs can all be successful techniques for catching walleyes from Nebraska waters,” Bauer said. “However, I would tell you that more walleyes have been caught from Nebraska waters drifting or trolling a bottom-bouncer and live-bait rig of some type, usually a spinner and nightcrawler, than any other presentation.”

Anglers should consider the species’ name when choosing a time of day to fish. The walleye is so named for its pearlescent eye that features a reflective layer of pigment to seek prey in low light or murky water conditions.

“Fishing more of the crepuscular period, your sunrise and sunset are better times to catch them,” Rydell said. “Maybe even fishing in the dark a little bit.”

Bauer said the time of day should dictate your approach.

“Walleye anglers spend so much time trying to finesse walleyes, often small walleyes, into nibbling on some live-bait presentation because they are fishing for relatively inactive fish during bright midday conditions,” he said. “If you fish during low-light periods, early and late in the day, after dark, cloudy, gloomy days, or when the wind blows, you will find an entirely different fish — a fish that is the apex, top-of-the-food-chain predator that they really are. They have a mouth full of sharp teeth for a reason, and during prime times they are mobile, agile and hostile.”

In Nebraska, serious walleye anglers often look to the west and central parts of the state.

“The best habitats for walleyes are large bodies of water, large rivers, large natural lakes and large reservoirs,” Bauer said. “In Nebraska, that means our large reservoirs, primarily irrigation reservoirs in the central and western parts of the state, are our best walleye habitats. Walleyes are a cool-water fish, a predator, primarily an open-water predator. They thrive in those larger water bodies that have an abundance of open-water baitfish.”

Rydell said surveys show Lake Winters Creek on the North Platte National Wildlife Refuge near Scottsbluff to have the highest density of walleyes in Game and Parks’ northwestern district with a substantial population of fish between 17-19 inches. Nearby Lake Minatare is down a little from previous years, but still has a sizable population of 17- to 20-inch fish.

Those seeking big walleyes in the west, Rydell said, should look to Whitney Reservoir in Dawes County and Merritt Reservoir near Valentine.

“Box Butte is kind of coming on with a nice walleye population,” he said. “We have a year-class that, last year, was about 13½ inches that should be about 15 this year. With pike numbers down in that lake, and that year class coming on, it will be one that should produce some nice walleye fishing in the future.”

Nebraska’s walleye population gets considerable help from the Game and Parks’ fisheries staff, who collect eggs and milt from walleyes early in the year at Merritt Reservoir, Sherman Reservoir and sometimes Lake McConaughy. Fertilized eggs are taken to Nebraska State Fish Hatcheries, usually Calamus and North Platte, for hatching and rearing.

How long the fish stay in the hatchery depends on the habitat and other factors of their destination. They can be released as 4-day-old fry, fingerlings, or sometimes 8-inch advanced fingerlings.

The minimum requirement for walleyes in Nebraska’s lakes is 15 inches and only one over 22 may be kept. Special regulations exist at Merritt, Sherman, Calamus, Elwood, Harlan County and Branched Oak.

A walleye of 28 inches or 8 pounds qualifies for a Nebraska Master Angler award. The state’s walleye record is a 16-pound, 2-ounce specimen caught at Lake McConaughy by Herbert Cutshall of Ogallala in 1971. Records indicate he caught it on a Storm ThinFin crankbait.

Whatever your approach, and as long as you’re being mindful of regulations and recommendations regarding the coronavirus issue, it may be a good year for you to target Nebraska’s big tasty, toothy predator.

The post Setting sights on the walleye appeared first on Nebraskaland Magazine.

Last week the weather was nice, temperatures were warm and none of you would have listened to me. . . . Thi... 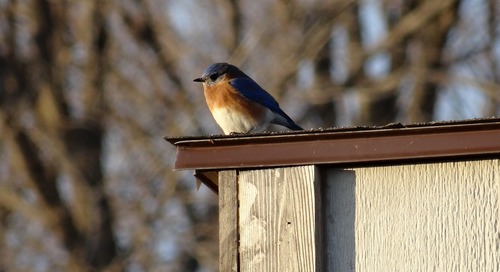 While at Home, Watch Birds

You’re staying at home, hardly going anywhere except for essentials. There’s not a lot to do. Or, is there?...

I know some of my blog topics are of interest to a relatively small audience.  I also know that if you are one of those in that small audience it can be very important to you.  Consequently, I...

Tomorrow is the rifle deer opener.  A bunch of you will be in the field looking for the “turdy-pointer”.  Wear your hunter orange, use your safety harness, know what is behind your target, have...

LINCOLN, Neb. – Payne Ahrens used his job as a farm hand to his advantage before last month’s upland bird season opener. While harvesting corn for his employer, the Superior man also was scouting...

LINCOLN, Neb. – The Nebraska Game and Parks Commission is seeking input on potential changes to duck and goose season dates for the 2021-2022 hunting seasons. The U.S. Fish and Wildlife Service...

LINCOLN, Neb. — A new grant from The Leona M. and Harry B. Helmsley Charitable Trust worth nearly $500,000 will assist Fort Atkinson State Historical Park in two revitalization projects. The...

LINCOLN, Neb. – The Nebraska Game and Parks Commission has temporarily closed its Lincoln headquarters to walk-up customer service in an effort to protect its staff and the public from a potential...

LINCOLN, Neb. — With the help of a $280,000 matching grant from the U.S. Environmental Protection Agency, the Nebraska Game and Parks Commission, working with partners, will be able to modernize...