On Tuesday, I had to make a quick trip down to southeastern Nebraska which gave me an opportunity to visit a pair of nesting Scissor-tailed Flycatchers in Pawnee County.  Scissor-tailed Flycatchers are striking birds with extremely long tails that are rare but regular (annual in occurrence) in our state.  Southeastern Nebraska is right at the edge of their breeding range.  Scissor-tails are a species of tyrant flycatcher in the same genus (Tyrannus) as Eastern and Western Kingbirds.  Both kingbirds are common summer residents throughout Nebraska.  This pair of Scissor-tails was reported nesting on a power pole at the intersection of  626 Ave and 710 Trail east northeast of Pawnee City last summer.  A pair, presumably the same one, was relocated and again found nesting on top of the power pole earlier this summer by Brian Peterson.  I was able to capture a pile of photos of these birds and a few are below. The nest located at the top of the pole and under a cover or bracket holding the pole’s insulators. You can see the bird’s long tail feathers sticking out from the nest.

Scissor-tailed Flycatchers are groovy birds and these birds will likely be at this location for a few more weeks before heading south later this summer. 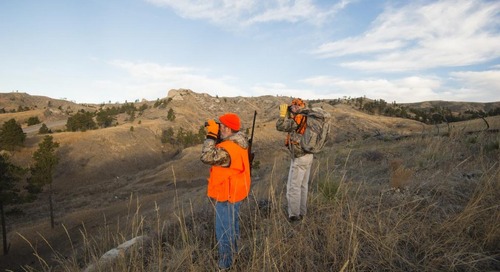 Plan Ahead for Hunter Ed

According to the calendar, summer officially begins on June 20th and the weather is heating up fast.  So in...