Some of our buddies over at Nebraska’s Department of Environmental Quality (NDEQ) investigated an odd phenomenon this winter that I want to tell you about.  Seems as though our somewhat unusual winter rains and runoff created a head of foam on some rivers in eastern Nebraska.  These pictures were taken on the Big Blue River in southeast Nebraska and Hadar Creek in the northeast:

Greg Michl along with Dave Bubb, also of NDEQ, shot some video on the Big Blue near Holmesville and Surprise:

I have seen some significant foam lines along the shorelines of large windswept lakes and reservoirs after a long period of high winds, but I have never seen anything like that, never anything to that extent.  That is just plain crazy.

Naturally, you can see why our co-workers at NDEQ were out investigating this phenomenon!  One would immediately assume that something was not right; that some kind of pollution event was occurring.  Certainly, phosphates in the water can cause foaming.  But, the fact that this was observed in a couple of different streams in different areas suggested that it may not have been any kind of pollution at all.  Forgive me for getting all pointy-headed again, let me present a short limnology lesson to explain this:

There is a lot of decaying organic matter in lakes, rivers, pits, ponds, and streams.  For example, in the fall as leaves fall from trees, some of them end up in water bodies.  As that organic matter decays it releases a variety of chemicals into the water including a variety of naturally-occurring oils.  Those oils in the water can encourage the formation of bubbles–Voila, FOAM!  I found an article from Michigan’s DEQ that explains it, Foam, A Naturally-Occurring Phenomenon.

Lord knows there is not a watershed in Nebraska that does not have a significant amount of vegetative residue going into winter, either from crops or grasses, trees and other naturally-occurring vegetative cover.  I am guessing the timing and amount of rain this winter was enough to result in a maximum amount of those naturally-occurring oils being released into the water.  Throw in some agitation to the water in a stream from a drop, dam, maybe some riffles, and then a constriction in the flow and you have the large heads of foam seen in the pictures and videos.

Just another example of one of those unexpected things you might encounter and observe while spending time on the water or in the field.  However, I would not recommend stripping down and jumping in to scrub up–that water was darned cold!

Mike, Dave, Greg, Terry, thank you for what you do, and thank you for letting me “borrow” your pictures and video!  Very interesting! 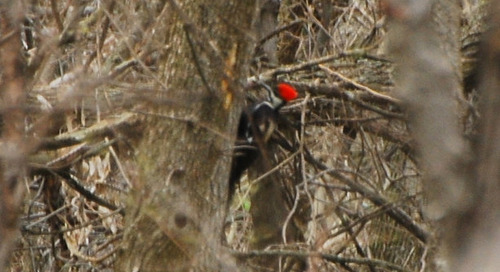 Since my last post was about a declining species, the Black-billed Magpie, I will focus this blog post on a...

LINCOLN, Neb. – While boating season still is months away, the Nebraska Game and Parks Commission suggests ...