Since my last post was about a declining species, the Black-billed Magpie, I will focus this blog post on an increasing species, the Pileated Woodpecker, to balance things out.  Pileated Woodpeckers are big (about crow sized), striking,  black-and-white woodpeckers with a red crest that are found in heavily forested regions of North America.  Pileated Woodpeckers occurred in extreme eastern Nebraska prior to settlement of the area by European Americans, but were extirpated prior to 1900.  Other than a few oddball sightings, Pileated Woodpeckers were absent in the state until 1999 when birds were found and nested at Fontenelle Forest, Sarpy County.  In 2002, Pileated Woodpeckers nested at Indian Cave State Park.  This species is now well-established at these sites and during the intervening years birds have slowly spread into other areas in Nebraska.   Along the Missouri River valley, they have spread north to at least Desoto NWR and filled in their range south from this site to the Kansas border in this river corridor. In the past few years, Pileated Woodpeckers have pushed into the interior of Nebraska.  In 2013, I was fortunate to stumble across a Pileated (pictured, above) along the Little Blue River south of Fairbury in Jefferson County.  These birds also appear, now, to be established at this location and they may have made it further up the Little Blue River.  There have also been a few reports along the Big Blue River in Gage County, but I am not aware of any confirmed nesting or sites where the species appears established (but it may very well be at some sites).

In just the past couple of years, the species appears to have quickly moved up the Platte River.   Recent sightings are from Platte River, Schramm and Two Rivers State Parks.  There are also a few very recent reports of Pileated activity all the ways up to the Fremont and Ames area in Dodge County.   Finally, a few additional sightings have come from northeastern Nebraska during the past decade.  Considering all of these reports, the current range of Pileated Woodpecker looks something like the purple shaded area, below.

More Pileated Woodpeckers in Nebraska is a very good thing.  Even though this bird is big and has a striking appearance, they are surprisingly elusive and a bit wary.   I have now seen several in the state, including three as recently as this past Saturday, but I have yet to get anything close to a decent photograph.  Below is a nice YouTube video showing this species up close and personal in case you are not familiar with this magnificent bird.

If you’ve seen a Pileated Woodpecker in Nebraska, drop me a note (joel.jorgensen@nebraska.gov).  I appreciate any additional data that changes the range map provided above. 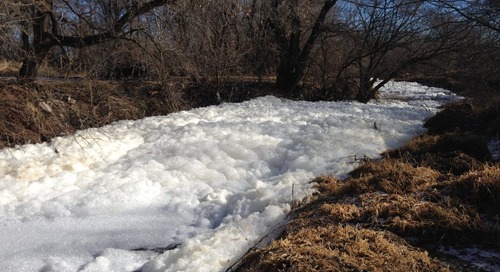 Some of our buddies over at Nebraska’s Department of Environmental Quality (NDEQ) investigated an odd pheno...