(BLOGGER’S NOTE: Warning! If you were not hungry for something sweet, you soon will be!)

Treasured memories are made around a fire ring.

A popular camping and backyard tradition in spring and summer is the roasting (or toasting) of sugar-based confections known as marshmallows over a campfire or other open flame. A marshmallow is placed on the end of a stick or skewer and carefully held over the fire or the radiant heat of coals.

This creates a smoky, caramelized or charred outer texture with a liquid, molten layer underneath.

According to individual preference, the marshmallows are heated to various degrees — from gently toasted to a blackened outer layer. Often, the latter is achieved by igniting the marshmallow.

Roasting the ultimate marshmallow though is a tricky endeavor. Getting it perfectly golden brown and crispy on the outside but soft and gooey on the inside can be a challenge. So, how does one roast the kind of marshmallow that doesn’t need to be covered with chocolate and graham crackers?

Here are some helpful hints on how to do that.

To cook the ultimate marshmallow you need the ultimate fire. A big fire is going to roast that sugary, creamy glob of deliciousness until it tastes like wood ash, and that’s fine if that’s what you want. But, what you need to achieve the state of the golden-roasted marshmallow are glowing hot embers next to flames to get that crispy exterior. It’s okay to have flames off to one side, but they really shouldn’t be under your prized marshmallow (unless you prefer the charred sugar crust). Also, regarding campfire safety, a few reminders are in order. Never start a campfire when there are fire restrictions in place. Always use an existing fire ring or pit. Make sure you are at least 15 feet from tent walls, trees or other flammable objects, and keep an eye on children near the fire. Game and Parks also asks those planning to build a campfire to limit firewood movement to prevent the potential spread of invasive pests such as the emerald ash borer.

You can buy fancy roasting sticks at any of your favorite camping stores or you can just use a stick long enough, sturdy enough and straight enough. Use hardwood sticks that do not contain sap or plant toxins. Roasting sticks need to be about as long as an adult’s arm (roughly 30 inches) and whittled to a point to easily insert the marshmallow.

The Technique and Result

The number one thing to remember when roasting a marshmallow is to be patient! Attaining the perfect consistency of gooey goodness takes a little time. Hold the marshmallow approximately five to eight inches from the coals on the edge of the fire. Rotate it around slowly, or go for a quarter turn at a time. You don’t have to change positions around a fire if you rotate the marshmallow. This should take about four minutes or so. As the marshmallow turns a crisp, tawny color, it will sag on the skewer. A vertical slit may appear where the marshmallow and the skewer meet indicating that it is essentially done. Exercise caution, the marshmallow will be very hot! Wait at least 30-60 seconds after pulling it out of the fire before touching it or eating it. If your marshmallow catches fire, don’t freak out. Just blow on it until the flame goes out. Don’t get discouraged, there is always someone (like me) who will eat the burnt ones! 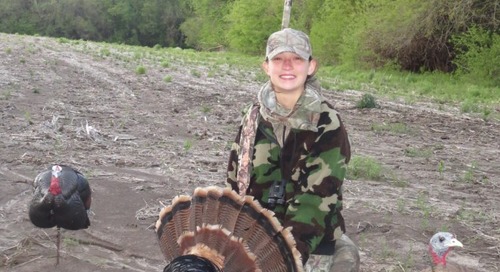 Our spring turkey season is winding down, but I am not quite done blogging about it yet.  Got another repor...

LINCOLN – A public informational meeting will be held June 1 in Ogallala regarding the Lake McConaughy/Lake...