CHADRON, Neb. – Disease issues have once again struck bighorn sheep lambs in northwestern Nebraska’s Pine Ridge, but a comprehensive research project is on track to counter the maladies.

Todd Nordeen, the Nebraska Game and Park Commission’s big game research and disease program manager, said all 21 lambs equipped with tracking collars in May and June have died – almost all to pneumonia.

While pneumonia is the cause, Commission biologists want to know what pathogens are triggering the disease. They have gathered and obtained samples from the dead sheep and shipped them to a laboratory for testing.

“We obviously have some deadly pathogens in the herds that are wreaking havoc,” Nordeen said.

Various bacteria can be the cause. After knowing the bacteria responsible for the pneumonia, researchers will develop a plan to counter the problem.

Nordeen said the collared lambs died from pneumonia in four to 57 days after birth, with most succumbing to the disease in 30-45 days. He knows of only one lamb, a non-collared specimen, still living in the Pine Ridge.

Unlike Nebraska’s Wildcat Hills to the south, birthing rates in the Pine Ridge have been low for the past three years. After no lambs survived there in 2016, the Commission decided to ramp up research efforts.

“Without any lambs our herd sizes in the Pine Ridge are going nowhere but down,” Nordeen said. “If we don’t do something, we won’t have bighorn sheep in northwest Nebraska.”

The lamb-tracking project began in earnest in February when the Commission, with financial support from conservation organizations, contracted a helicopter crew to capture pregnant ewes. Those females were equipped with vaginal implant transmitters, commonly referred to as VITs. Through radio telemetry, researchers determined when the VITs dropped from the birthing canal, an indication that a lamb was born. Commission staff and volunteers, through an exhaustive effort in rugged terrain, were able to locate, capture and collar the lambs shortly after they were born. Surveillance of the lambs helped researchers investigate the deaths and collect samples.

The project is the latest chapter in bringing back bighorn sheep back to western Nebraska, an effort spanning more than four decades.

The Audubon’s subspecies of bighorn sheep was native to the butte country of the Panhandle but was extirpated from the state in the early 1900s because of disease, unregulated hunting and habitat loss. The Audubon’s sheep became extinct in 1925.

Rocky Mountain bighorn sheep from Custer State Park in South Dakota were reintroduced to Nebraska in a fenced area of the Red Cloud Buttes at Fort Robinson State Park in 1981. Those sheep were gradually released to the wild beginning in 1988 and additional release efforts of sheep from Montana, Canada and Colorado in 2001, 2005, 2007 and 2012 have resulted in herds that reside in areas of the Pine Ridge between Harrison and Chadron, and the Wildcat Hills south of Gering and east to McGrew.

Nebraska has a population of about 300 bighorns, 115 of which are in the Pine Ridge. The Wildcat Hills herds have been more successful at warding off disease issues, growing to about 185 sheep after releases in 2001 and 2007.

One of the primary funding sources for the reintroductions and research has been the state’s bighorn sheep hunting program, in which one or two permits are occasionally issued if biologists determine the presence of enough mature rams suitable for harvest. The deadline to enter this year’s permit lottery is Aug. 4.

“Although we have some age gaps there are still older age rams that have survived over the years to allow for harvest,” Nordeen said. “In the years to come, there will be fewer rams in the Pine Ridge region. We do still have a good number of sheep in the Wildcat Hills, though.” 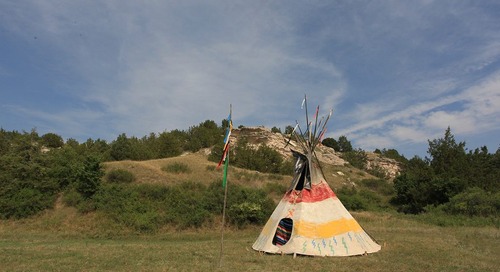 If the hills and bluffs at Ash Hollow State Historical Park could talk they would have been buzzing about t...

LINCOLN, Neb. – Two state fishing records have been certified this summer by the Nebraska Game and Parks Co...