If the hills and bluffs at Ash Hollow State Historical Park could talk they would have been buzzing about the Convergence on Sacred Ground event last weekend. Perhaps they were pleased to have the Lakota’s with their teepees, dances and sacred dialog being echoed about. Wagons once again rolled along the Oregon/California trail. The sounds of horses and cattle filled the air as cowboys roped and branded cattle on the meadows of the park. And the aromas from Dutch ovens cooking swirled with the changing breezes in many of the camps. The fur traders set up tents all showing their wares that came from the land along with the games and good times from times past. Hosted by the Friends of Ash Hollow, the event showcased many different ways of life from the 1840s to 1860s during the three-days of activities. The history that was brought to life transported everyone back to the times when wagons traveled down Windlass Hill cutting deep ruts into the hillsides, along with American Indians, settlers, cowboys, fur traders and soldiers who all once converged at Ash Hollow. The spirits of the Lakota filled their ancient home once again as healing on the land took place; descendants of Little Thunder and General William S. Harney walked to the site of the Blue Water Creek Massacre for a ceremony, where villages of Little Thunder were killed by Harney’s troops in 1855.

Little Thunder’s family prayed for the spirits of the people who owned each of the artifacts in a private ceremony before they went on display for public viewing at the Ash Hollow Visitor Center. The prayers bring back the spirits of those ancestors. The artifacts included a child’s doll, a decorated saddle, a bladder bag full of porcupine quills, a bow, an ammunition pouch and powder horn, moccasins and a ceremonial rattle. Visitors to the event had a great time playing games, throwing tomahawks, walking down the small city of fur trader and settler tents, going on trail rides and learning about the history of Ash Hollow. 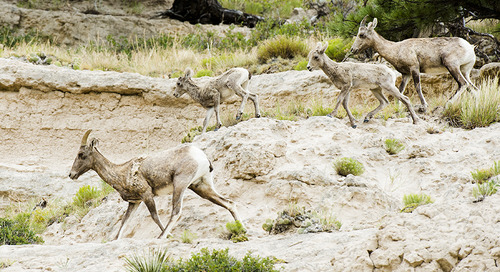