If people concentrated on the really important things in life, there’d be a shortage of fishing poles.  ~Doug Larson

Because I know of places where the water seems endless.

Because the day is bright and the sand pulse along the shore is warm.

Because I enjoy the challenge, pursuit and thrill of the catch.

Because I want to bond with a loved one in the natural world.

These are the primary reasons why I like to fish. But there’s more to it, much more to it.

Every angler has his or her own reasons for going waterside.

A large part of fishing for me is the peace of mind that comes with it. No, I don’t mean you put your brain to sleep; any angler will tell you that if you’re not thinking about what you’re doing, you most likely aren’t catching any fish, right? However, fishing shares one similarity with good sleep, seriously. It takes the stresses of everyday life – the busyness, worries, responsibilities, etc. and pushes them right out of the cerebrum!

I will tell you there’s just no room for those pressures in my brain when I’m fishing. I’m concentrating on rigging my presentation, casting to a certain spot, working my lure or bait in the water, noting conditions, and watching the weather and wildlife, as well as honing in on the other things that go along with effective angling plus engaging with a relative, friend or co-worker while on the water.

Even more rewarding is introducing or re-introducing someone you know to the lifestyle of fishing through the Nebraska Game and Parks Commission’s new Take ‘Em Fishing challenge. You can find out more details about that here.

If you think about it, fishing is a calming influence, whether casting a line alone or with someone. It is a reflective and meditative activity that forces you to slow way down, enjoy your surroundings and positively interact with a person. Being out in nature and the elements with folks that are close to you, away from your computer, iPad, iPhone and Android (unless you’re using it for pictures!), allows your brain to relax and focus on one simple task – catching fish.

In the United Kingdom, for example, a national angling survey revealed that the main reason millions of anglers go fishing is not to net a record fish, but to escape crowds, de-stress, relax and experience the placidity of nature. Furthermore, an Australian study found the factors related to health and mental wellness were key in getting people out fishing.

In our country, the Recreational Boating and Fishing Foundation describes recreational fishing as a natural stress reliever because anglers are surrounded by nature, accompanied by loved ones, unplugged from electronics, and distanced from the so-called “real world.” That notion was supported by a team of researchers drawn from the University of Southern Maine, the University of Utah, and the VA in Salt Lake City.

In a study involving U.S. military combat veterans, they found that participants had significant reductions in overall stress and post-traumatic stress disorder (PTSD) symptoms as well as improvements in sleep quality after participating in an angling retreat. These Iraq and Afghanistan war veterans also had lower levels of the stress hormone, cortisol, for as long as three weeks after a weekend fishing trip. Researchers also noted that their patients slept better, expressed lower levels of depression and anxiety, experienced fewer symptoms of somatic stress or stress related to the body, and were far less likely to experience the feelings of guilt, hostility, fear, or sadness normally associated with Post Traumatic Stress Disorder (PTSD) and horrific experiences.

The Recreational Boating and Fishing Foundation additionally reports that among the people in the U.S. who hope to take up fishing, 38 percent say they see fishing as stress-reliever. Many of these prospective anglers think the soothing sound of water lapping at the shore and the pull of a fishing line would be enough to drive their stress away.

Fishing, more than anything else, takes me, personally, out of a normal setting and fully places me in another, a natural one, even if it’s just for a few hours. It’s an actual, physical scenario, too, unlike trying to lose myself in a book, movie, TV miniseries or reality show. Fishing is atmospheric. It’s around me continually, and it demands my full attention. It’s also great to share with the people in my life.

Therapeutic experts claim that, because fishing requires focus, it helps take a person’s mind off internal conflict. Locating fish, developing a strategy to catch them, choosing the correct fly or lure to hook them, and then properly presenting that to the fish all require critical thinking skills and creativity, which allow a healthy escape from stress, depression, and anxiety.

In this country, purchasing a state fishing permit and having the freedom to spend a day near the water means a great deal. Fishing is one of the more accessible outdoor activities where nearly anyone can easily be a participant! Whether it is trolling for walleye in a reservoir or using bobbers for bluegills in a farm pond, recreational fishing helps to release us from our highly stressful, hustle and bustle, everyday routine.

Nothing brings on the sense of being alive and helps to rebuild and restore our mental reserves like a day on the water trying to catch a fish and interacting with a family member or friend in an aquatic environment.

Like the naturalist Henry David Thoreau said: “Everyone should believe in something, I believe I’ll go fishing.” Right on, HDT! Remember: “It’s Never JUST Fishing!” 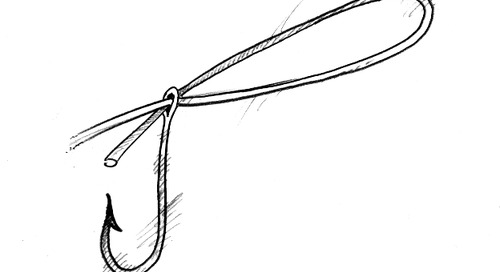 Do you want to keep that big fish on the line? These three knots will help. Practice before you go so you a...

LINCOLN, Neb. – Families can enjoy outdoor recreation and education at a series of events to be held this s...