LINCOLN, Neb. – The public is invited to comment on a draft conservation plan for monarchs and at-risk pollinators in Nebraska.

The Nebraska Monarch and Pollinator Initiative has developed a Conservation Strategy for Monarchs and At-risk Pollinators in Nebraska. The purpose of this plan is to collaborate with stakeholders to support populations of monarchs and other at-risk pollinators, as well as their ecological services, in Nebraska.

The nation’s eastern population of the monarch butterfly has declined as much as 90 percent over 20 years. The monarch’s plight is also bringing attention to other pollinators, such as bumblebees.

Conservation workers, government organizations, non-government organizations, agricultural groups, businesses, and educators formed the Nebraska Monarch and Pollinator Initiative because they realized the importance of safeguarding pollination and avoiding a threatened or endangered listing of the monarch in Nebraska. The group has been meeting periodically over the last year to have a positive discourse on statewide conservation strategies.

Action items in the plan include voluntary efforts on state-owned properties, public lands, and private lands, as well as education and outreach initiatives to benefit pollinators. A key component of the plan is to encourage growth of native milkweeds, which are needed as food for monarch caterpillars. In addition, a list of native plants provided in the plan can help land managers, homeowners, and gardeners decide what to plant to attract pollinators.

Read the draft conservation plan at OutdoorNebraska.gov/monarchconservationplan. Contact Melissa Panella at melissa.panella@nebraska.gov by May 8, 2017 to provide comments.

The post Public may comment on draft plan for monarchs and at-risk pollinators appeared first on NEBRASKALand Magazine. 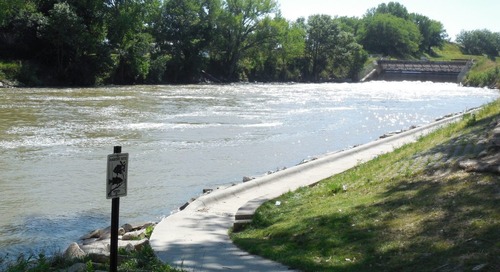 I debated whether to blog about this or not, but then I thought if you were an angler that fishes the canal...

Learn more about birds at Fort Hartsuff SHP on May 6

LINCOLN, Neb. – Learn more about how to feed birds and view them with binoculars at the Birding at the Fort...