Carine was on the trail before anyone else. Jamie, Bob and I woke up to the delicious smell of coffee and cinnamon, courtesy of Larry. A light breakfast of granola and energy bars on the trail had to suffice, as we left O’Neill early that morning to beat another wind. We called Verna and Jim to let them know that we would meet in Atkinson to find something decent to eat.

Jamie and I fell back again. We chatted casually as we rode, not in any hurry. When our eyes fell on something growing by the side of the trail, we brought our bikes to a screeching halt and screamed in unison, “Morels!” They were the biggest morel mushrooms we have ever seen, and we found more and more the harder we looked. Needless to say, that made us late for breakfast again.

Jamie and I pulled into the Atkinson Livestock Auction  to meet with the rest of the crew. There’s a little restaurant in the sale barn, and they cooked up a mean breakfast, which tasted amazing after riding all morning without a decent meal. We showed everyone our morel mushrooms and said that we would cook them in Stuart that night.

Before getting back on the trail, I advised Carine to ease up and enjoy the scenery because she was riding like she had a death wish. Carine would be the only person in our group to ride the entire Cowboy Trail without cheating on the highway. When Jamie and I caught up with the group before Stuart, Carine had a surprise for us – she had found more morel mushrooms while taking a short break by herself near some dying trees and water. They were the first morels she has ever picked, and she saw large turtles and many birds during her respite, too. Jamie and I were so proud of her.

The ride from O’Neill to Stuart was relatively short and pleasant, considering our long ride the day before. Jamie, Bob, Jim, Verna and I stayed at The Sister’s House, abeautiful Victorian home that became the residence of over 100 religious women of the School Sisters of St.Francis when St. Boniface Church purchased the house in 1920. The public can now reserve the house for private parties and meetings; it was perfect for weary Cowboy Trail travelers. Nearby, St. Boniface Church was a sight to behold. Carine and Larry stayed in their camper at Stuart Park, which had hook-ups and showers.

There was still plenty of daylight left. Jamie took out her ukulele and sang for us on the porch. It was pleasantly warm, and the soft breeze that afternoon felt good on our skin under the shade of the house. We got to know each other better that afternoon. We learned that Jim Kropatsch used to work for a medical equipment company in Columbus, that he has ridden the Katy and Mickelson trails in Missouri and South Dakota, respectively, participated in many marathons and races, and that he is a two-time cancer survivor. Bob Trautwein is a retired librarian in Columbus; he and his wife Judith now spend their time traveling the world. Carine Stava and her husband, Larry, run an equestrian center, The Farm at Butterflat Creek in Bennington, where she teaches hunter jumper and foxhunting. Verna Simons is an avid cyclist; she rides with a group in Pierce every week and was preparing for the Bicycle Ride Across Nebraska (BRAN) right after her ride with us. Jamie and I could not help but admire our older companions, and hoped that we would possess half the heart and drive when we “grow up.”

Later in the day, I rode into town to get some ingredients at the Stuart Locker on Main Street. Jamie roasted the asparagus we found near O’Neill in the house. Larry gave me some butter and whiskey for my sautéed morel mushrooms. We served them as appetizers before dinner, and they were a big hit.

At the Cast Iron Bar and Grill that evening, we ran into Dave Harlan, who manages parks in the area from the Game and Parks Commission’s Bassett office. Dave said he and staff dragged his section of the trail before we arrived, and we thanked him for it. Stuart was one of our most memorable nights on the Cowboy Trail.

CRAWFORD, Neb. – A broken dam board in the outlet structure at the lower Ice House Pond on Fort Robinson St... 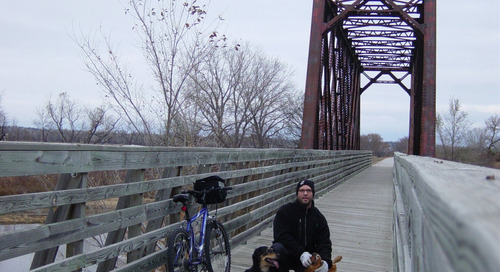 The ride to O’Neill would be our longest and hardest ride. The night before, we all agreed to ride out earl...