The ride to O’Neill would be our longest and hardest ride. The night before, we all agreed to ride out early to beat a westerly wind that would pick up later in the day. And when

Larry heard how tough the trail was, he offered to haul all our bags and gear in his camper, which relieved us beyond imagination. Bob must’ve really hated his trailer, because he vowed to sell it once he got home.

The morning ride out of Neligh was quiet and beautiful. It showed clear, blue skies and the sun shined a soft golden color all around us. Bob rode with us for a little while before hopping back onto the highway. Carine, Jim, Verna and Nancy were ahead, while Jamie and I brought up the rear.

Shortly after, my phone buzzed. It was Carine, who had just gotten a flat tire from the notorious goathead thorns that torment cyclists worldwide. Nancy was with Carine, and neither of them had a spare inner tube. Having brought plenty, Jamie and I picked up the pace to help her. We had liners installed in our tires before we left so the goatheads didn’t bother us.

Just before Clearwater, we found  the bridge over the Elkhorn River is still awaiting repairs after being washed out by flooding in 2010, as is a section of trail near town. So we doubled back and traveled north on 516½ Avenue to meet with Highway 275, which led us to town. We had already ridden 10 miles that morning before stopping at the Shell Gas Station for coffee and breakfast sandwiches; unfortunately, the Clearwater Café is closed on Sunday. On a side note, if you’re ever in town at dinner time, check out the L Bar B Steak House, which serves delicious New York steaks. After breakfast, we returned to the trail, which runs right next to the highway near the gas station.

Near Ewing, another river bridge was temporarily closed. It was located only a few yards from the highway, so we hopped onto the blacktop and rode to  the  Ewing  City  Park.  Nancy, Jamie and I stopped there for a short break and to refill our water bottles.

Riding on the road, Bob arrived in O’Neill quickly and the others weren’t far behind. Bob called Jamie to see what was taking us so long. Jamie and  I were knee-deep in grass by the trail  in search for asparagus, which grows wild every spring. Although we found a few good spears, most of what we found were sad, limp stalks that did  not survive the recent frost. There was a man on the trail looking for asparagus with his young granddaughter, too. When we finally arrived in O’Neill, we met up with the others and rode into town to have lunch at the Blarney Stone. Guinness was on tap and it tasted so good.

Bob, Jamie and I set up camp at Carney Park, which also had showers, flushing toilets and full hook-ups for Carine and Larry’s camper. We had dinner that night at Tia Zia, a Mexican restaurant in town. Verna and Jim bunked at the Super 8. It would be Nancy’s last stop with us, and I was sad to see her go. Our group was now down to six.

Light rain came down that night, and I remember waking up to a loud, eerie chattering of birds in the trees above my tent. It was as if the tent was surrounded by jungle, and the time was 3 a.m. 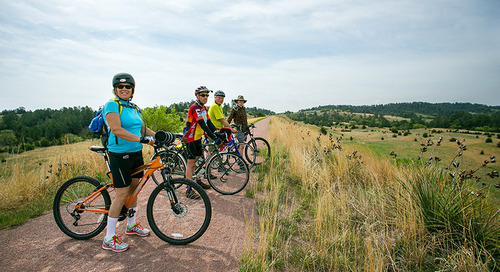 Carine was on the trail before anyone else. Jamie, Bob and I woke up to the delicious smell of coffee and c... 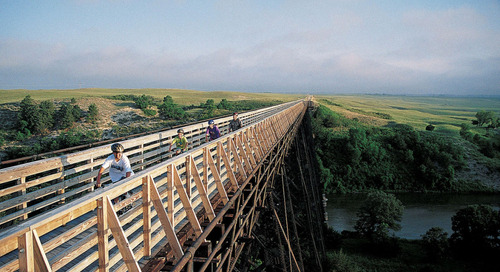 There is no excerpt because this is a protected post. The post Protected: Day 1: Norfolk to Neligh appeared...