Home » NEBRASKAland Magazine » Plus the Trout
× Share this Article

Fall stockings of put-and-take rainbow trout draw anglers out of the house for a holiday season meal, but where this autumn ritual gets really interesting are those lakes where top-notch fisheries already exist. There, you’ll have no idea what’s fighting on the other end of the line.

Grove Lake — The trophy northern pike in this northeastern Nebraska lake near Royal are just as excited about fall trout stockings as anglers, and as they put on weight for the impending winter, they give anglers a much larger option along with newly stocked rainbow trout.

Halleck Lake — Staying in the metro, Papillion’s Halleck Lake is a “there’s no telling what you’ll catch” fishery, said Bauer. From big largemouth bass, channel catfish and an occasional muskellunge, trout anglers might just run into a fish of a lifetime.

Bessey Fish Pond — “Forget about the trout,” Bauer jokingly said about this Nebraska National Forest at Halsey hotspot. “Go after the bluegills and big catfish.” But also keep the recently added rainbows in mind as well.

Carter P. Johnson — One of many angling options at Fort Robinson State Park in Sioux County, anglers will find nice largemouth bass striking the same lures used for rainbow trout — as long as the lures being used are the right ones.

While “the right lures” are a matter of opinion in fishing, much like the proper political affiliation or baseball hitting technique, there are definitely some wrong lures. “If you’re fishing dough bait or Powerbait,” said Bauer, “you’re probably only catching trout.” Instead, when fishing this list of lakes, tie on in-line spinners like roostertails and size No. 8 husky jerks, which will be about 3 inches long. These lures give anglers multispecies options.

“Throw a spinner, and there’s no telling what you’ll catch,” Bauer said — especially when you’re fishing these lakes.

The post Plus the Trout appeared first on Nebraskaland Magazine. 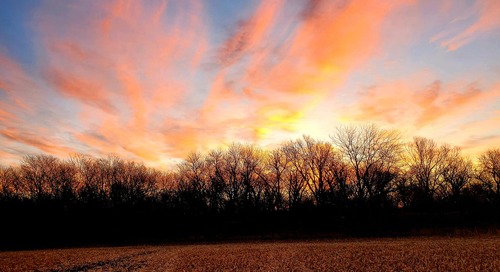 The morning air is crisp and cold. The stalks of corn stubble and hardwood trees along the river bottom sta...