The Not So Plain Plains Onion

Of our state’s six species of native onion, the Plains onion, though small in stature, has the largest, and in my opinion, most elegant flowers. Unlike the other onions, its flowers are scented, a sweet fragrance reminiscent of hyacinths or cloves. Unfortunately, hidden among the prairie grasses, this uncommon little onion is rarely seen, except when exposed by its colorful May blooms.

Aptly named, the Plains onion (Allium perdulce) grows throughout the central Plains from South Dakota through central Nebraska and into northern Mexico. In our state, it is found in mixed-grass prairie mostly on loam to loamy sand soils, but avoids the pure sands of the Sandhills.
In spring, the plant sprouts two to four slender, grass-like leaves from a bean-sized bulb with a fibrous coating and typical onion odor and taste. In favorable years, the bulb also sends up a single flowering stem at the top of which develops a tight head of urn-shaped blooms with rose-colored petals that fade to purple. In the onion’s far southern range, the flowers are white to pale pink in color, and oddly, nearly odorless.

After the small, black seeds mature in midsummer, the stem and leaves wither, and the plant survives the heat of late summer as a bulb only. In autumn, if moisture is plentiful, the bulb sprouts a rosette of leaves to harvest the fading sunlight and replenish its bulb with starches before winter’s onset. In a rock garden on the warm south side of our brick house, where the plant is grown as an ornamental, these leaves persist well into winter, even when covered in snow.

In Nebraska, the Plains onion is most similar in appearance to the prairie onion (A. textile), which grows in our dry, western prairies and has white, unscented flowers. The Canada onion (A. canadensis), common in eastern Nebraska prairies, differs from the Plains onion by having white to lavender flowers in an open head. It is also a taller and more robust plant.

During my career, I have crossed paths with the Plains onion perhaps only 10 times. The first was about 20 years ago, when I came upon a couple of flowering plants in a small, degraded prairie in Hamilton County. The largest population I have encountered was located on a high prairie ridge top overlooking the Missouri River near Santee and contained a few hundred flowering plants.
The onion grows in a small prairie on our South Dakota farm where in most springs there are less than 50 flowering stems. In 2013, the year after the severe drought of 2012, my wife, Grace, saw a strange phenomenon and called me from the farm: “There’s a thousand little purple onions blooming in the prairie.” The 2012 drought set the stage for 2013’s prodigious onion bloom by stressing the prairie grasses, killing some and shrinking the roots of others. With plentiful spring rain and released from competition with the still recovering grasses, the onion bloomed in abundance and littered the soil with its long-lasting seed. Prairie management and other aspects of climate might also entice the onion, as well as other spring wildflowers, to bloom. Abundant soil moisture, for example, likely stimulates fall leaf growth and photosynthesis providing the onion with plenty of energy for flowering the next spring. Well-timed prescribed fire and livestock grazing in prairies can also stress grasses, reducing competition for the onion.

In the rough–and-tumble prairie, the Plains onion does not roll the dice when it comes to flowering and seed production, which requires extensive energy. In unfavorable years, many plants survive as a bulb only with no above-ground growth, or they sprout only leaves and no flowers. The wise little onion waits patiently for favorable conditions, and only then does it send forth its beautiful blooms. If lucky, you might be there to see them.  ■ 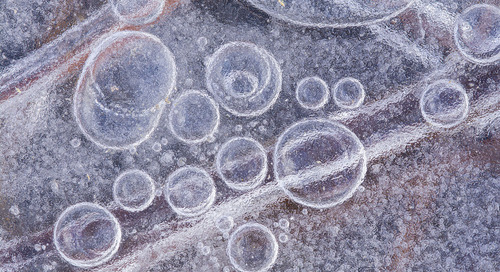 As a photographer drawn mostly to small subjects like bugs and flowers, it can be hard to find much to phot... 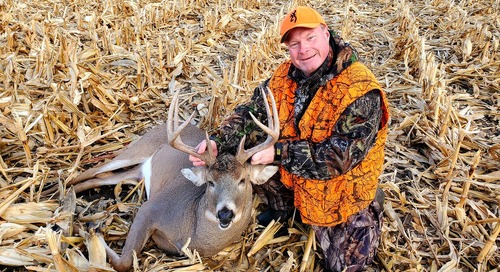 “Other than family and close friends, this is what I love and had made me who I am.” – Scott Smathers, Nebr...