As a photographer drawn mostly to small subjects like bugs and flowers, it can be hard to find much to photograph after the end of the growing season. Most invertebrates die, migrate or go dormant. Plants wither and turn brown. It’s fun to seek out interesting texture and patterns after a fresh snow or on a frosty morning, but those opportunities are relatively uncommon during most winters.

When I start to feel especially stir crazy, one of my go-to remedies is a trip to a frozen pond or wetland. As long as it’s cold enough to freeze the surface of those water bodies, I can usually find something worth investigating and photographing up close.
Sometimes, I find insects, seeds or other little treasures encased in ice. Other times, I enjoy exploring the shorelines and other edges where ice freezes, thaws and refreezes, forming intricate lines and designs. Those options, though, pale in comparison to my favorite subjects: ice bubbles.

I’ve spent many happy hours wandering across the ice with my eyes pointed downward, searching for bubbles. Some might call that eccentric or strange. I prefer “peculiar,” but either way, it sure beats sedentary boredom. Sure, it’s cold, and I am always worried about having 4 inches of clear, solid ice, but the fresh air and exercise is perfect. Plus, I try to stick to shallow wetlands or pond edges where the water is only a few feet deep.

Besides enjoying the aesthetic beauty of frozen bubbles, I also like trying to figure out the science behind what I’m seeing. I think I understand the basics, but I can’t always decipher the chemical and physical processes that form those little capsules of air within the ice. I’ll try to share what I’ve gleaned from reading and talking to other scientists, but I know there are nuances I haven’t yet grasped.

To start with, water has in it a lot of gases, including oxygen, carbon dioxide and methane. Oxygen is released by actively respiring plants. Carbon dioxide is a byproduct of carbon-based life forms like plants and animals being broken down by aquatic bacteria and other microbes. Methane is produced when that same decomposition happens in the soil beneath the water, where low levels of oxygen (anaerobic conditions) exist. Those and other gases remain dissolved in the water of ponds and wetlands, where they are repeatedly cycled in and out of plants, animals and microscopic creatures of many kinds.

The other important factor to understand is that frozen water can hold less air (those combined gases) than liquid water can. Have you ever looked closely at ice cubes when you pull them out of the tray in your freezer? Often, the outer edges of the cubes are clear, but the center is opaque. That opaqueness is the result of countless miniscule bubbles in the middle of each cube. As the water in the tray freezes from the outside in, that cooling water forces out the air it can no longer hold in solution. Much of that air gets pushed toward the center of the cube until it erupts into tiny bubbles, around which the remaining water freezes.

As I understand it, bubbles of air in frozen lakes and wetlands arise from the same basic process. Air is forced out of cooling water and forced into “clusters of air” (bubbles) as ice forms around it. I see a lot of variation in the size, depth and number of ice bubbles during my explorations. I assume the speed with which the water freezes plays a big role in that, in addition to some other factors. An example of one of those other factors is when the top of the ice thaws on a warm day and then refreezes overnight. The air being squeezed out by freezing water is prevented from being pushed continually lower by the layer of hard ice below it. That has to influence how the resulting bubbles look, but I’m far from smart enough to predict the result.

When I’m out, I also notice and photograph other intriguing phenomena, such as pockets of air around plant stems and “streams” of tiny bubbles radiating outward from both plants and dead animals embedded in ice. The pockets of air around plant stems, especially close to the top surface of the ice, might be caused by the ice melting around the edges of those stems as the sun warms them. The streams of tiny radiating bubbles are a little trickier for me to explain, but I suppose it has to do with air being forced out of the saturated dead insects, leaves or stems as they freeze.

Sometimes, the majority of ice in a frozen wetland is as opaque as the center of those ice cubes I mentioned earlier, and there’s not much to photograph. If I were better organized and analytical, I’d try to keep track of the weather and other conditions that lead to the formation of opaque ice. That would save me the disappointment of bundling up on a cold blustery day, only to find ice I can’t do much with photographically.

On a good day, though, I’ll find that the surface of a wetland or lake has numerous layers and patches of ice that have frozen and formed in various ways. As I explore those sites, I’ll often find clear ice with bubbles visible several inches or more below the surface, various colors and tones of frozen water, and air pockets and streams of tiny bubbles around frozen plants and other organisms — especially near the shore.

When the conditions are right, I can spend hours happily hunched over or prostrate on the ice with my camera and tripod. While I don’t see anything strange about that, I’m sure others disagree. I usually try to find locations far from roads, but sometimes I have to endure the periodic pickup or other vehicle slowing down as they pass by. The driver usually gives me a side-eye stare — you know, the one with which they pretend to be looking straight ahead while using every bit of their peripheral vision to record what I’m doing, as well as my license plate and general description.

I can imagine the subsequent conversations later, with a spouse or neighbor:

“Did you notice that peculiar stranger out on the wetland today? He can’t be ice fishing in a foot and half of water, can he? What in tarnation do you suppose he’s up to?”

I’m not sure the truth would make them feel any better. Maybe one of these days, a brave and curious passerby will stop and make their way out to where I’m photographing bubbles to ask me about it. If so, maybe we can have a lively and engaged conversation about the air-holding capacity of freezing water. Or maybe they will pull out their own camera and begin photographing ice bubbles, too.  ■

Chris Helzer is the Nature Conservancy’s director of science in Nebraska. 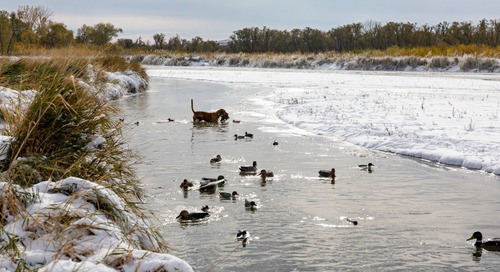 An Adventure Story I love to duck and goose hunt and go whenever the opportunity presents itself. One of th... 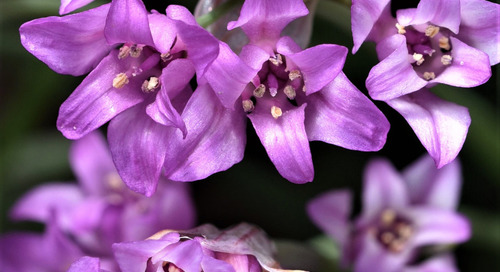 The Not So Plain Plains Onion Of our state’s six species of native onion, the Plains onion, though small in...