When out and about capturing photos and stories for NEBRASKAland and other Commission materials, my mind frequently wanders to what the region we now know as Nebraska’s Panhandle looked like long ago.

While at Fort Robinson State Park, I cannot help but think about how it must have appeared as an active military post in the 1800s — lively with U.S. Cavalry soldiers instead of today’s tourists. A drive through the ghost town of Orella on the serene and scenic northern Sioux County grasslands makes me think about the scene when it was a thriving community at the turn of the 20th century. When photographing our many unique landforms in the Panhandle, my mind drifts even further back, to when those buttes and bluffs began taking shape millions of years ago. (A collection of night photos of those landforms served as inspiration for a June 2016 magazine article “Rock Stars,” one of my favorite projects of all time.)

A recent indoor photo assignment that first seemed a a bit boring spurred my imagination about as much as any past excursion, though. The task was to capture images of portions of a painted mural and other artwork at the newly expanded Wildcat Hills Nature Center south of Gering. The photos will appear on an interpretive sign explaining the mural, a conceptual piece by artist Jan Vriesen that shows the animals of Miocene fossils discovered in the region. It will be just one of many impressive features highlighting natural wonders, from both today and long ago, when the exhibits take form in months to come.

No doubt, these remarkable megafauna mammals that occupied our region as many as 23.3 million years ago would prove to be an impressive sight if still living today. With my background, I can’t help but to believe they would be an ample food resource for hunters and incredible subjects for wildlife photographers. Not to mention, they might pose some challenges for the Commission’s wildlife division.

Hunters looking to put some impressive antlers on the wall surely would love pursuing Prosynthetroceras, a large deer-like creature referred to as “sling shot horns.”

In order to track one down, perhaps we would mount a Parahippus, a three-toed horse.

Or, perhaps we would pack in gear on the slow-footed Moropus, another horse-like mammal. This one stood seven feet tall at the shoulders.

What would landowners think of the Palaeocastor, the “dry land beaver”?

And do you suppose there would be any controversy surrounding carnivorous predators such as Ysengrenia, known as “bear dog?”

Or what about the “younger” saber-toothed cats of roughly 10,000 years ago, which have not only a painting but an impressive fossil on display at the center.

The Wildcat Hills Nature Center serves as the southern gateway to the Fossil Freeway, a corridor of seven impressive sites devoted to the prehistory of the High Plains. Each is well worth the visit.

By looking at the wildlife of yesteryear, it seems we can gain a greater appreciation for the animals that roam the Panhandle today. I know that was the case for me and my 10-year-old daughter, Kiera, who assisted me on the shoot.

We are surely not the first to have the imagination stimulated by this artwork, a feature of the center since shortly after the building’s original construction years ago. When complete, the new exhibits of the nature center are sure to pay apt tribute to many wonders of the natural world … regardless of when they existed on the landscape.

The post Photographing wildlife … from millions of years ago appeared first on NEBRASKALand Magazine.

LINCOLN, Neb. – Broodstock collected by the Nebraska Game and Parks Commission this spring will aid in the ... 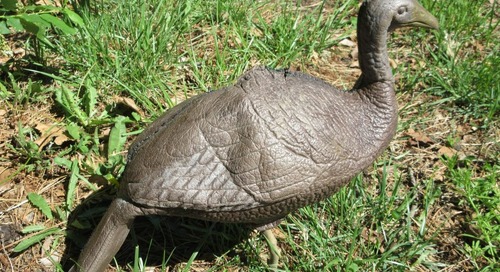 My blog followers know that I have only one thing that really distracts me from fish and fishing all the ti...